Russian spies suspected to be behind the Salisbury novichok nerve agent attack are wanted regarding an explosion at an ammunition warehouse that left two people dead.

The duo, who used passports in the names of Alexander Petrov and Ruslan Boshirov, are being hunted by Czech police as part of the investigation into the 2014 blast.

They are believed to be carrying several passports – but those two names match the ones used by the two suspects in the attempted poisoning of former Russian spy Sergei Skripal and his daughter Yulia.

The Skripal’s were struck with the Soviet deadly nerve agent in March 2018 in Salisbury, England – but Russia denied any involvement.

Yet after UK police released their names and photos in regards to the attempted hit, cops issued a European Arrest Warrant for Alexander Petrov and Ruslan Boshirov.

Mugshots of the two men – who are wanted for serious crimes in the Czech Republic between October 11, 2014 and October 16, 2014 – were published by the National Centre against Organised Crime of the Criminal Police and Investigation Service (NCOZ).

They then traded those for a Moldovan passport with the name Nicolai Popa, born July 18, 1979, and a Tajikistan passport in the name of Ruslan Tabarov, with the date of birth October 23, 1975.

The twosome first headed to Prague, then the Morovian-Silesian region, before travelling to the Zlin region, according to Czech authorities.

The investigation is centred upon an order by the Czech government to expel 18 Russian diplomats identified by an intelligence agency as secret agents of the Russian SVR and GRU services, who were suspected of being involved in a 2014 explosion.

Hamacek said he had summoned Russian ambassador Alexander Zmeyevsky to inform him of the decision on Saturday evening.

“We have good reason to suspect the involvement of GRU officers from unit 29155 in the explosion at the ammunition warehouse in Vrbetice” in the east of the country, Babis explained, adding that the information had been received on Friday.

“The explosion led to huge material damage and posed a serious threat to the lives of many local people, but above all it killed two of our fellow citizens, fathers of families,” the Prime Minister continued.

The Czech Republic’s interior minister, who is also an interim foreign minister after the previous one was sacked earlier this week, said he was upset the situation would “fundamentally damage Czech-Russian relations”.

He also directly referred to the Salisbury saga, saying: “We are in a situation similar to that in Britain following the attempted poisoning in Salisbury in 2018.”

The UK Government accused Russia of attempted murder in the wake of the shocking incident, and expelled around 300 diplomats alongside announcing a series of punitive measures.

The wanted duo were filmed “moments before” the botched hit on March 4 and left the country hours later in a flight out of Heathrow, cops said.

They  stayed in the City Stay Hotel in Bow, East London, during their time in the UK.

The two men claimed they were just tourists visiting Stonehenge and Salisbury in an interview with the state-run TV station RT on September 13.

The pair said: “Our friends had been telling us for some time we should visit this extraordinary town.”

Claiming to be interested in the history of the local area, the pair praised Salisbury Cathedral for its “123-metre spire and its clock, one of the first ever created in the world that’s still working”.

Despite being filmed “moments before” the botched hit before leaving the country hours later, the brazen Russians claimed they spent “no more than an hour” in Salisbury.

Poland also announced on Thursday the expulsion of three Russian diplomats who were “carrying out activities to the detriment” of the country.

It seemed a show of force with the US, who had earlier announced sanctions and the expulsion of 10 Russian diplomats for the Kremlin’s interference in the US elections, and a massive cyber attack, as well as other militant activity. 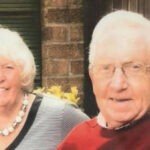