Bangkok police were checking security on Friday in preparation for large evening crowds attracted to riverside spots and parks to send off flower-filled Krathong floats.

Bangkok police deputy chief Pol Maj-General Panurat Lakboon led officers to ensure safety measures were in place at “Asiatique The Riverfront”, which is expecting the city’s largest Lot Krathong turnout at 30,000 people. Chulalongkorn Pier is expecting about 5,000 revelers and the area under the Rama 8 Bridge will likely draw another 4,000, said

Panurat. Panurat said police would provide security and order at 71 locations across the city as Bangkok celebrates Lot Krathong on Friday night. About 200 policemen, “Thesakij” law enforcement officials, and volunteers, as well as Asiatique guards, are to be stationed at the city’s most internationally well-known celebration site. They will staff five visitor-screening points to prevent anyone from taking weapons, fireworks or other illegal items into the place, Peanut said.

The Asiatique area will also have coverage by security cameras and a drone flying above to give officials the larger picture said Panurat. He has also instructed police officers at all Bangkok precincts to watch out for youth street racers who might create disturbance during this period, especially at 10 known spots that include Kaset Nawamin, Bang Na-Trat, Chaeng Wattana, Kanchanapisek, and Rama IV roads. Source: Nation 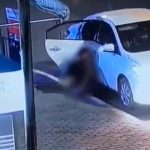 Lao netizens find out the PDT girl Caught on CCTV