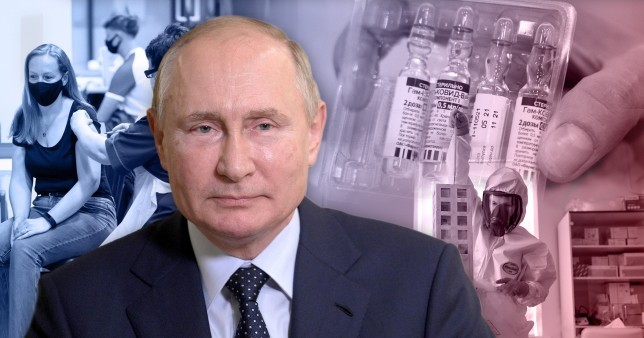 A Russian agent swiped the formula for the Oxford-AstraZeneca Covid vaccine to use for the country’s Sputnik jab, ministers have reportedly been told.

UK security services now have ‘proof’ an agent stole the blueprint from the pharmaceutical company in person – along with other vital data, it’s claimed.

Both jabs are adenovirus vaccines, meaning they use other viruses to teach the body’s immune system how to fight coronavirus.

Russia was first accused of targeting the UK, US and Canada by the Government last year.

Late security minister James Brokenshire said he was ‘more than 95% sure’ Russian intelligence agencies were responsible for attacks on drug companies and research groups.

He said: ‘We are very careful in terms of calling these things out, ensuring that we can have that confidence in attribution. We do believe that we have this here.

‘I think the Russian government is being so hypocritical claiming to support responsible behaviour in cyberspace while secretly conducting cyber-attacks like this and others.’

Conservative MP Bob Seely, who specialises in Russian affairs, has warned ‘we need to get serious about Russian and Chinese espionage’.

He told The Sun: ‘Whether it is stealing the design for Astra- Zeneca or blackmailing us over energy by these authoritarian and totalitarian regimes, we need to get wise to them.’

It comes after a report in 2020 concluded Russia ‘poses immediate and urgent threat to UK national security’.

They found ‘no evidence’ Vladimir Putin sought to influence the 2016 Brexit referendum, but only because the Government didn’t investigate this. Former foreign Secretary Dominic Raab said he ‘categorically rejects’ this claim.