Russian Bomb Threat. Two Russian nationals have been arrested in Thailand after threatening to bomb and kill staff at their country’s consulate in Chonburi

They face deportation from Thailand.

Back in January the Russian authorities had appealed to the national police chief Gen Chakthip Chaijinda to arrest them. The Russians want the two men deported

They had been causing trouble at the consulate last December.

Dmitry Revtovich said he would bomb the consulate and kill everyone. He was with Ilia Gilev.

The Russians were initially shown the door but refused to leave and carried on living in Thailand.

On Monday they were finally arrested and will now be deported 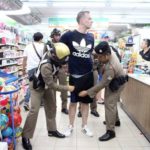 Thailand’s Muslim problem in the South, can anything improve?