A registered sex offender who broke his electronic ankle and fled abroad six months ago was arrested in Thailand last week, the South Korean Embassy in Bangkok said Tuesday.

Thai tourism police apprehended the 51-year-old man in the Thai beach resort of Pattaya on Saturday.

The man, who served his term for sexual assaults, was released from prison in 2014 and the authorities required him to wear an electronic monitoring device for seven years, a measure to put him under surveillance.

He cut the device off his ankle and traveled to Japan on March 25.

South Korean police put him on Interpol’s wanted list. After learning he had gone into hiding in Thailand via Osaka, South Korea sought the Thai police’s cooperation.

Thai police are looking into whether the man committed crimes in the country. It appears he is likely to be deported to South Korea in due course. 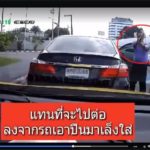