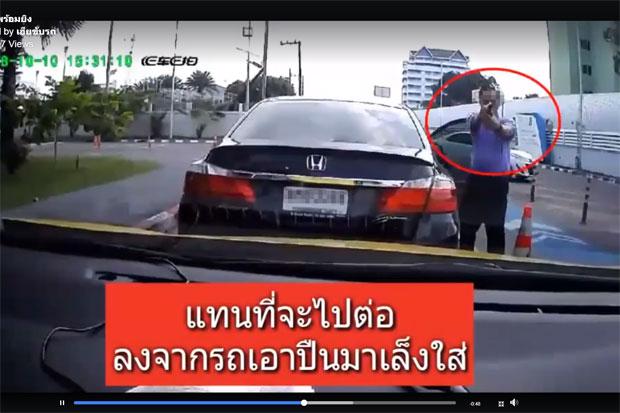 A hot-headed motorist pulled a gun and pointed it angrily at a following vehicle during an unexplained road-rage incident inside the grounds of the government complex on Chaeng Watthana Road in Bangkok’s Laksi district.

The incident was videoed and posted on a Facebook page titled hia khab rod (water lizarddriving a car) on Monday.

Voices were muted in the dashboard camera clip, which was dated last Wednesday afternoon.

According to subtitles on the clip, the vehicle travelled along Chaeng Watthana Road from Prapa Canal and turned right into the government complex.

When the motorist slowed down to watch out for other vehicles, the driver of a black Honda Accord travelling behind blew his horn impatiently and then rapidly overtook the camera-equipped vehicle, passing on the left.

The overtaken vehicle then followed the Honda car, which shortly afterwards stopped for crossing traffic.

The Honda driver got out of the car, gestured angrily and raised and pointed a pistol at the following motorist.

A woman then emerged from the Honda’s front passenger seat and also glared at the following vehicle.

Security guards quickly showed up. The woman then shepherded the angry man back into the car.

The dashboard camera footage ended with a message saying the incident occurred inside the government complex, where vehicles normally travel one after the other, and asking why the man was carrying the gun.