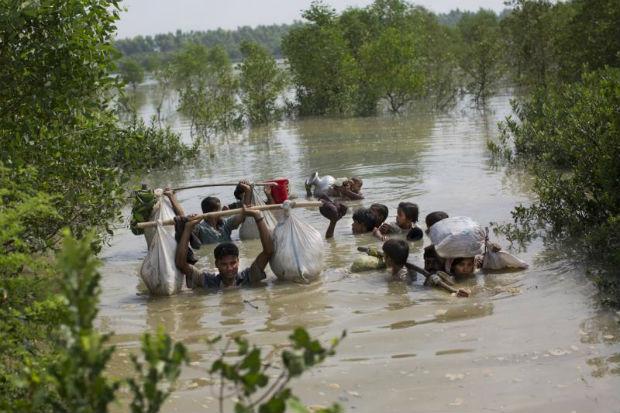 Rohingya refugees have fled Myanmar up to 123,000

The UN refugee agency said on Tuesday, The number of Rohingya refugees that have fled to Bangladesh to escape violence in Myanmar is higher than previously thought at 123,000.

That higher number, revised up from 87,000 estimated on Monday, was the result of aid workers conducting new, more accurate counts at both established and makeshift refugee camps, said UNHCR spokeswoman Vivian Tan. It did not mean all 36,000 new refugees counted had entered in the last 24 hours.

Thousands are streaming daily across the swampy border, having walked for days through forests and rice paddies to reach safety in Bangladesh. Others were attempting to cross the river that separates the two countries, and at least several dozens have drowned in the attempt.

Older, established refugee camps that have been housing Rohingya since the 1990s have already reached capacity. Tens of thousands of new arrivals had nowhere to go and were sheltering in makeshift camps, in village alleys, on open roads or in fields.

The latest influx of Rohingya began Aug 25, when Rohingya insurgents attacked Myanmar police posts, prompting security forces to launch “clearance operations” in response. Both Myanmar security officials and Rohingya insurgents accuse each other of committing atrocities in the last week. Refugees are arriving in Bangladesh with stories of their homes set aflame and Myanmar soldiers firing indiscriminately around their villages. Bangkok Post