Home » No one taking responsibility for Yingluck complaint

No one taking responsibility for Yingluck complaint

A complaint which is due to be filed against fugitive and former PM Yingluck Shinnawattra has been delayed as both police and military play a game of hot potato.

Police and military authorities are making contradictory statements about who will file a complaint against former Prime Minister Yingluck Shinawatra, who became a fugitive late last month.

Deputy police commissioner Srivara Ransibrahmanakul said Tuesday that the military would file an immigration criminal complaint against Yingluck after she fled the country last month, a claim junta spokesman Winthai Suvaree contradicted, saying the police would do so instead.

“It will be the police who will file the complaint,” Winthai said Wednesday. “This case should proceed like most cases, where the police have to find the person according to the arrest warrant.”

But police said on Tuesday that responsibility to take action fell on the military, almost two weeks after Yingluck failed to show up to hear the verdict in her two year malfeasance trial.

“I believe that soon the military will be the one to submit the complaint. They are considering whether international relations will be impacted if they do so,” Srivara said. “Currently, a complaint can be filed against her, according to the Immigration Act.”

“The investigation is moving forward. About 80 percent of the jigsaw is complete,” he said without elaborating.

Yingluck has made no statement since she vanished. Close associates have said she fled the country before the verdict was read Aug. 25 in her malfeasance trial and made her way to Dubai. Her brother, fugitive former Prime Minister Thaksin Shinawatra, has been known to reside there at times since going into self-imposed exile in 2007.

The junta has rejected accounts that high-ranking members were complicit in aiding her escape.

According to the Immigration Act of 1979, it is a crime not to enter or leave the kingdom through designated immigration checkpoints. The maximum punishment for breaking the is two years in jail and a 2,000 baht fine for Thai nationals.

1,000 Baht fine for driving through Pattaya tunnel on motorbike 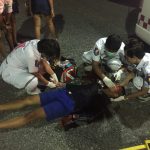