Researcher Arrested: A freelance scientific researcher was arrested late Sunday night after allegedly shooting dead his friend with a bullet he claimed had magical powers.

Police said Thongrob Tojinda, 51, was arrested at his house in Pathum Thani’s Muang district after firing a shot into his friend’s right temple. Bancha Kunnawut-opas, 43, an electrical engineer, died on impact.

Thongrob told police that he and his friend were drinking together when he boasted that he had magic bullets after placing them in water that had been blessed by a monk.

But Bancha argued that all bullets became defective after they were put in water, Thongrob told police.

He claimed that Bancha challenged him to fire into his head as the bullets would be dud. Thongrob said he took up the challenge but the bullet proved neither magical or a dud and his friend died. 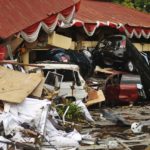