Motorcyclist Dies : A motorcyclist was killed when he crashed into the rear of a ten-wheel truck parked on an unilluminated stretch of road near the Bang Phli electricity office in Samut Prakan Sunday night.

Local residents said the lights on the central road reservation had been dark for several weeks and that no one had undertaken repairs despite the area’s proximity to the Bang Phli office of the Metropolitan Electricity Authority. 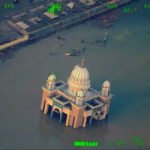