Vendors on a small island off the eastern coast said on Tuesday they fear the recent murder of a German tourist will drive travelers away.

The alleged killer of Miriam Beelte, 27, was taken to the crime scene today for a “crime reenactment”. A reporter on the island, which is located off the coast of Chonburi, said local vendors complained that there were fewer tourists than usual today. Business owners voiced their concerns that the brutal killing will taint Koh Sichang’s reputation as an idyllic destination.

“It’s really affected tourism on Koh Sichang because many tourists immediately left after the incident,” Rattiya Sangthong, an eatery owner on the island, told reporters.

Rattiya added that the murder was “unprecedented,” saying she had never before seen such a brutal attack on a foreign tourist in the 37 years she has spent living on the island.

“I’d like to plead to tourists, both Thai and foreign, to travel to Koh Sichang as usual, because the bad guy is already under arrest,” she said.

Police said 24-year-old Ronnakorn Romreun raped and killed the tourist on April 7 before hiding her body among some rocks. Investigators said Ronnakorn, who worked as a garbage collector in the area, confessed to the charges.

Ronnakorn reportedly told police he was high on meth at the time, and said Beelte ignored him when he was trying to talk to her. After the suspect reenacted his alleged crimes today, he was taken to Chonburi Court for a remand hearing.

After visiting the suspect at the police station, Ronnakorn’s mother tearfully apologized to the media.

“I’d like to apologize on my son’s behalf,” Nonglak Pothong said. “I told my son that he must face karma for what he did. He knows the penalty of rape and murder is death.” 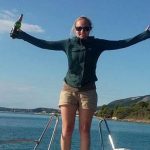 The Transport Company adding 3,000+ rides per day this Songkran