Prime Minister Prayut Chan-o-cha defended a crackdown on overpriced lottery ticket vendors on Tuesday saying it was part of the government’s efforts to stop people abusing the law and was not politically motivated.

“Stop talking about the five tigers. [That quota] was scrapped long ago.

The tickets are now distributed directly to registered vendors who have grouped together. We will keep working on it and we are monitoring them,” he said.

In mentioning the “five tigers”, Gen Chan-o-cha was referring to the large distributors that won the bulk of ticket distribution quotas from the Government Lottery Office (GLO) for an extended period.

These five private groups effectively controlled lottery tickets under the previous quota system and were often blamed for the inflated ticket prices, as they had to pass through several large vendors before reaching retail vendors.

“There are no ‘five tigers’ or special quotas anymore.

The quotas are now in line with the new GLO regulations after the National Council for Peace and Order [NCPO] came in. It has nothing to do with politics. It’s something the government has to do,” he said.

Meanwhile, Lertsak Pattanachaikul, the Pheu Thai Party’s MP for Loei, on Tuesday denied any involvement with the Bluedragon vendor or Muang Loei United Football Club, despite allegations to the contrary.

Although he co-founded the club, he has nothing to do with its operations, he said.

The club was implicated when Seksakol Atthawong, an aide to the prime minister who leads a sub-committee tasked with investigating the irregular pricing of lottery tickets, said a football club in Loei was being sponsored by Bluedragon. Bruce Willis gives up acting due to brain disorder aphasia 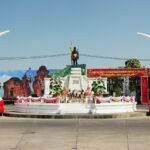