Home » Over 6,000 orchids intercepted on way to Laos

Customs officials in Nong Khai intercepted 6,419 orchids of various species that were being smuggled into Laos.

Customs office chief Nimit Saeng-amphai said on Wednesday the seizure had taken place at 8.45pm last Friday after a large amount of cardboard boxes were noticed among consumer goods aboard a bus waiting to cross the First Thai-Lao Friendship Bridge.

When no one came forward when called to claim the boxes, they were opened and found to contain 2,935 Vanda orchids, 1,450 Dendrobium orchids and 300 Grammatophyllum orchids.

He said it wasn’t yet known whether these specimens were wild or cultivated. If wild, they will be transferred to the National Park, Wildlife and Plant Conservation Department. If not, they’ll be auctioned off.

Customs also found 31 longan saplings, which the Agriculture Ministry bars from export for fear of hurting the country’s fruit industry. 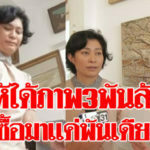 First ANA A380 rolls out of assembly hangar