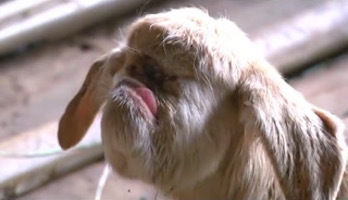 A three-day-old baby goat has become a hit – after he was born with ONE EYE.

The adorable kid, named Tuah Jabang, was born on Sunday morning on a remote farm in Sabah, Malaysia.

Goat herder Awang Rosli Mat Taib, 47, said he heard strange noises the night before – when the mother went into labour – then discovered the newborn in the morning.

Awang said he had taken the baby goat to the vets who had performed check-ups and said that apart from his condition he was healthy.

However, he cannot suckle his mother and needs to be fed milk using a small syringe as the congenital disease has also affected his mouth.

Awang said: ”When I was in the goat pen that night I realised that a goat was crying as it gave birth to a child. There didn’t seem to be anything strange during the birth.

”I checked early the next morning and was surprised to find that the baby only had one eye.

”I took the kid to the local vets for more inspections because of the difficulty in breastfeeding him. The kid is weak since it has a small mouth and can only consume milk through a syringe.”

Awang said that the birth of a goat with one eye was the first in the village and neighbours had been amazed by it.

The condition, known as cyclopia, occurs in one in every 16,000 born animals. However, the survival rate is much lower.
It is caused when the two hemispheres of the brain do not separate which results in a formation of a single central cavity with one eye, or sometimes partially fused or separate eyeballs.

Last year, a goat in India was born with one eye and villagers travelled from across the region to worship it. 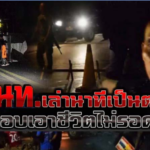 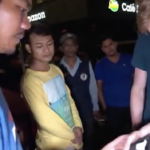