Overweight Thai monks are facing fresh calls to eat more healthily and take exercise amid concerns over their health. Thailand is home to some 300,000 Buddhist monks who each morning rise at dawn to breakfast on donations of sweet snacks and desserts.

The ritual of offering monks food to thank them for their prayers and teachings is known as giving alms – but this tradition, combined with the clergy’s sedentary way of life, has given them a weight problem.

Sugary drinks Almost half (48 per cent) of the Thai monkhood is obese, according to a study published in 2016. More than 40 per cent of the monks have high cholesterol, nearly 25 per cent have high blood pressure and one in 10 are diabetic, the research, from Chulalongkorn University in Bangkok, found. Monks typically fast daily from 12.00 noon, so they routinely boost their energy levels with sugary drinks, which also plays a role in the obesity crisis.

What’s more, they are prohibited from wearing shoes and must not exhibit vanity, two factors which deter many from exercise. Exercise ‘complicated’ Phra Promwachirayan, member of Sangha Supreme Council of Thailand, was responsible for introducing the 2017 Health Charter for Buddhist Monks aimed at improving the physical, mental, intellectual and social well-being of monks.

The abbott has now said that while exercise is “complicated” for monks it is “not impossible”, according to The Guardian. “Monks should exercise but it is difficult for us,” the newspaper quoted him as saying. “You can exercise to promote your health but not to make your body muscly like a boxer. You cannot do weight lifting and you cannot jog, that is not proper, only fast walking or maybe a walking meditation. He also recommended yoga – but “not in public”. 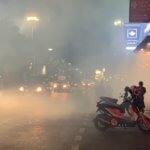