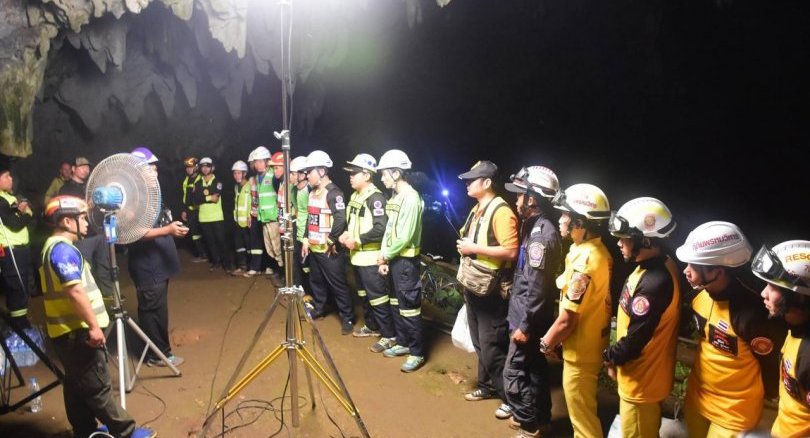 Royal Thai Navy SEALs on Monday joined the search for 12 youths and their football coach missing after visiting a cave in Tham Luang-Khunnam Nang Non Forest Park in Chiang Rai on Saturday afternoon.

Eighteen SEALs divers arrived in Chiang Rai at 1.40am on Monday in an RTN 2112 aircraft and immediately set to work blasting sand out of an underwater passageway to gain access to the other side of the cave.

By 10am they had found no sign of the missing group, a source with a local rescue unit said. That deep in the cave, mobile phones were not working.

Meanwhile the level of muddy water in the cave had risen by two metres, reaching seven metres in depth, the source said.

The dozen teenagers from Ban Phong Pha and their coach, Ekkapol Chanwong, 25, had finished a practice session on Saturday afternoon and then went to the cave, but were trapped inside by a flash flood.

Passageways in the seven-kilometre-long cave range from 100-150cm in height and a stream runs through portions of it.

The youngsters and coach, their escape presumably blocked by floodwaters, are believed to be in a dry section of the cave about 4km along its 7km length.

It’s believed the last 3km of that distance is also inundated and unsafe.

Several sections are underwater due to cave wall erosion that has trapped the water inside and landslides preventing drainage.

The rescue worker said officials considered piling up sandbags to stop more water going in and using pumps to empty the cave but decided it would be safer to wait for the water level to decrease naturally.

“We have sent in enough drinking water and food for the kids to last at least a week, until the water goes down,” he said. 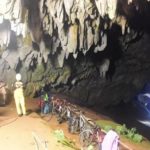