Troops and Interior Ministry officials have conducted a search of several temples in Tak’s border district of Mae Sot and rounded up monks from Myanmar on charges of unlawful entry into the kingdom.

Patcharin Boontapuan, Mae Sot assistant district chief, and troops from the Mae Sot-based Taskforce 14, checked several temples in the district and found that many monks from Myanmar had sneaked across the border as they had no travel documents. At Wat Nonb Bua Burapha in Moo 7 village in Tambon Mae Pa alone, the officials found the temple staffed by 29 Myanmar monks and just five Thai monks. The migrant monks hold no travel documents. They will be deported later today along with their fellow Myanmar monks found at other temples. MP – EP 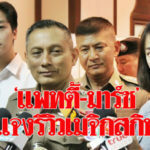