While Singapore is seen as the most peaceful country in the world, India,  Bangladesh, Philippines and Pakistan rank lowest, according to recently released World Justice Project (WJR) report.

The report measures the perception of people about order and security with reference to the prevalence of common crimes, including homicide, kidnapping, burglary and theft, armed robbery and extortion, as well as people’s general perceptions of safety in their communities. It also measures whether people are effectively protected from armed conflict and terrorism, whether people resort to intimidation or violence to resolve civil disputes amongst themselves or to seek redress from the government, and whether people are free from mob violence.

According to the survey people in Singapore feel most secure and perceive the country to have order and peace as compared to other regional countries. In Asia, Singapore is followed by Japan (world rank 8). The country although has been under the missile threats coming from North Korea, people perceive their country to be comparatively secure in terms of limited civil conflict and effective control of crime within its borders.

South Korea (world rank 22) is ranked third in Asia. Although the tension with the North has always disrupted peace nevertheless people within the country perceive their country free from intimidation and mob violence, serious  instances or crime and local terrorism. China (28) is ranked fourth in Asia followed by Mongolia, Malaysia, Vietnam and Indonesia ranked 39, 41, 42 and 49 respectively.

Nepal (57) is ranked ahead of its South Asian neighbours that have each seen a share of ethnic and religious conflicts.

People in Sri Lanka (59) perceive the country to be vulnerable to ethnic tensions as well as ensuing social crisis.  It is followed by Myanmar (64), Thailand (69) and Cambodia (81).

India is ranked 98 globally. With the right wing government in power, the country has seen an increase in violence against minority community in terms of dictating food choices and forcing people to show their patriotism.  It is followed by Bangladesh (102) and Philippines (107).

At 113, Pakistan is ranked most unsafe country in the world. 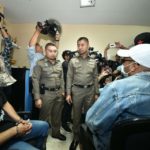