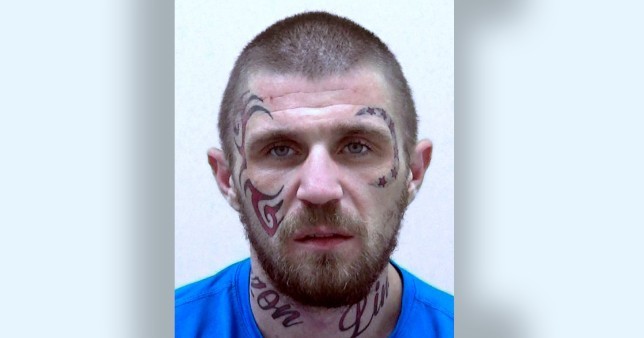 An abusive boyfriend left his partner looking like a ‘torture victim’ by attacking her with a blowtorch, shovel and his dog.

‘Monster’ Shane Hellens has been jailed for six years for subjecting his girlfriend to a horrific campaign of violence.

During their short relationship, the bully fractured his victim’s bones, let his dog repeatedly bite her and attacked her with a blowtorch and garden tools.

The 31-year-old threw jars and bottles at her head, emptied rubbish from the bin over her, repeatedly punched and kicked her and dragged her across the floor by the hair.

Newcastle Crown Court court heard Hellens started displaying controlling behaviour within weeks of starting a relationship with the woman in spring 2020, smashing five of her phones and ripping off the clothes she was wearing in jealous rages.

On one occasion, he stood over her where she lay on a bed and whacked a guitar over her back and shoulders until it completely smashed.

He smashed his laptop over her head and allowed his dog to bite her four times, causing her to need hospital treatment after the wounds became infected.

On another despicable occasion Hellens was in the toilet and called to ask if she wanted a cigarette, but when she put her hand in he used a blowtorch on her, causing ‘excruciating pain which she had never felt before’.

He then spent the following days grabbing the badly wounded hand, causing terrible pain and preventing it from healing.

Despite being arrested, he went on to inflict even worse injuries, assaulting her with garden tools and breaking her ankle and arm.

The brutal violence reached its peak shortly before Christmas when the
31-year-old, who was on bail for the previous attacks, brutally assaulted
her for five minutes, leaving her ‘looking like she had been in a serious car accident’.

Prosecutor Herrmann said: ‘In the early hours of December 18 last year in the
garden of his sister’s house, the defendant caused serious injury by beating her
repeatedly with his fists, his feet by kicking and stamping, and by using
weapons with force believed to be garden tools, specifically a shovel or
similar.

‘She had the left the defendant’s sister’s house but when she returned the
defendant dragged her out by her hair.

‘She believed she was going to be killed. She was knocked unconscious and
had a broken arm, a fractured foot, concussion, and bruising.

‘Police observed her injuries and described it as though she had been
involved in a serious road traffic accident.’

The court heard that the victim wasn’t released from hospital until January
13, almost a month later.

A victim impact statement was read out on behalf of the complainant’s
mother, who said her daughter was so badly damaged by the abuse she had tried to kill herself.

The mum said her daughter was living in fear and had moved away from her home town so she could protect herself.

She said: ‘Before she met him she could cope with day-to-day life, she
can’t do any of that anymore.

‘She was such a trusting person, this has happened because she trusted him.

‘She said to me she could not believe anyone could be that cruel.

‘The level of abuse she experienced in such a short period of time has put
her in a state of shock.

‘She was utterly and totally brainwashed by that monster.’

Turning to Hellens, she said: ‘She was in a wheelchair for four weeks because of what you did to her.

Her body was covered in scars. She looked like a torture victim.

‘She has survived a cruel animal.’

The judge jailed him for 6 years and three months plus an extended licence
period of one year.

Hellens was also given an indefinite restraining order against the victim
and banned from keeping dogs for life.

For more stories like this, check our news page. Delta Plus variant found here is not the same as the one found in the UK. PHIL Collins will be quizzed under oath