Home » Uracha, mother and brother silent as they appear in money-laundering case

The 26-year-old woman, along with her mother Srithana Promma and younger brother Chaipan who were also accused, were originally required to report to police on Tuesday but had postponed the meeting by a day.

Banyin had cited a need to keep his bail valid in another case by reporting to the Phra Khanong Court on Wednesday. That case is over charges for allegedly colluding in the premeditated killing of Chuwong in a 2015 car accident.

In addition to the money-laundering charges now facing Uracha, is also facing another trial, along with Banyin and Kantana, over charges of faking documents to claim Bt300 million worth of shares belonging to Chuwong.

Construction tycoon Chuwong, 50, was found dead in the front passenger seat of a car driven by the uninjured Banyin after it hit a roadside tree in Bangkok’s Prawet district on June 26, 2015. Banyin claimed the man died in the crash.

But Chuwong’s relatives have laid a complaint that the death was suspicious, given that Chuwong’s Bt300 million in shares had been transferred to the two women, whom the relatives claimed to be Banyin’s close associates, just days before Chuwong’s death. 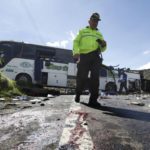