Miss Jacobs, a model/actor and former winner of Miss Teen Thailand has been arrested along with her boyfriend on drugs charges.

Miss Teen Thailand 2006 , Amelia “Amy” Jacobs, and her older boyfriend ran into some trouble with police this morning when their Bangkok home was raided for drugs.

Metropolitan police announced in a press conference this afternoon that they arrested the couple on drug charges this morning at their house in the city’s Sai Mai district just after midnight, reported The Nation.

Amelia, 28, and her boyfriend, Poonyawat Hirantecha, 40, were in possession of 70 grams of crystal methamphetamine, 16 tablets of ecstasy pills, the type of scale often used to weigh drugs, and other paraphernalia.

At the press conference, police revealed that the two confessed to purchasing the meth for THB40,000 (USD1,209) for 100 grams with plans to resell it for THB800 (USD24) per gram. They also allegedly admitted that they had been drug dealers for one year.

The former beauty queen, who is also well-known for glamour modeling and a role in the Channel 7 TV drama “Thida Wanorn,” which translates as Monkey’s Daughter,was said to be on drugs when the raid occurred and allegedly claimed she had been using drugs for the past year due to stress, it was revealed by police.

However, she also claimed that she had never bought any illegal drugs. 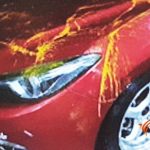