A Cambodian man was electrocuted and died after he tried to retrieve a volleyball underneath a house being built in Chon Buri’s Phan Thong district on Sunday evening.

The worker was identified by Phan Thong police as Kong Geuy, 23.

His friends told police that they had been playing volleyball after work when Phan went under the house to retrieve the ball. He had gone into the workers’ makeshift living quarters and came into contact with an electric current leaking out from galvanized iron sheets being used as their house walls.

Friends tried to rush Phan to Phan Thong hospital but he died on the way.

Police believe that by loosening one of the iron sheets Phan accidentally cut a power cable connected to the workers’ living quarters.
The Nation
Please follow and like us: 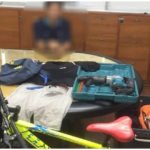