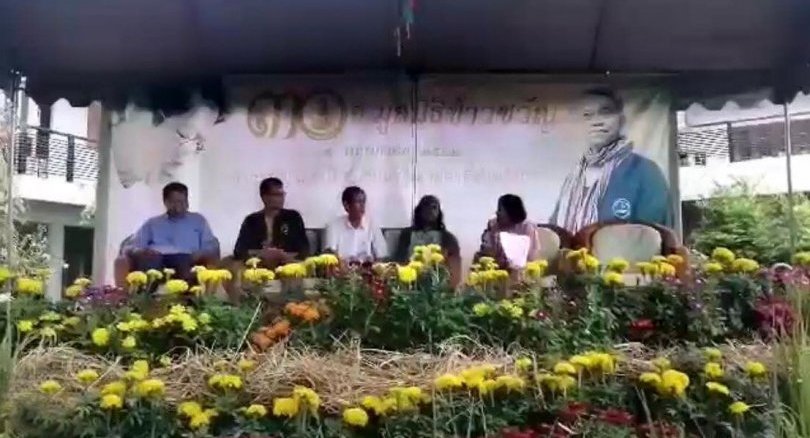 Traditional medical practitioner Decha Siriphat plans to stage a rally for 20 days to raise public awareness to support marijuana-based medicine production and to campaign for changes to the narcotics law.

The government recently decided to loosen controls on the uses of marijuana, allowing it to be used in medicines under strict conditions. The changes came into effect on February 19.

For instance, those allowed to possess and produce medicines based on marijuana must be state agencies or research institutions working in the field or they must be registered as medical practitioners first.

Their medicinal formulas must also be registered first or follow approved formulas or pass trials before distribution, the lengthy processes that are seen as posing critical obstacles to marijuana-based medicine development, especially by traditional practitioners.

Decha, a long-time community rights and rice variety conservation advocate, has just been newly endorsed as a traditional medical practitioner after experimenting with marijuana-based medicines under his own formula for years. He is still waiting to see his medicine formula approved, and has decided to make a move to campaign for “freeing marijuana from obstacles to become medicines for ordinary people”.

He estimated that nearly 1 million Thais or so would benefit from using marijuana-based medicines to cure illnesses and the production. But the distribution of medicines under the strict narcotics law could do a little to help them.

If he managed to produce the medicines under the guidelines, he said he could help only around 10,000 patients a year due to strict processes while neglected almost a million others.

“The law needs to be amended again because it can do a little at this point. We want people to access medicines and that’s the reason why we are pushing for an amendment,” said Decha.

He first distributed his medicines to patients for free in Phichit province.

“It’s my dream and with that our public health would be much more progressive than it is now,” said Decha.

Witoon Lianchamroon, a director of BioThai, a non-profit organisation promoting community rights and biodiversity and food security, said its next challenge was to amend the law again.