Sian Kempster, 29, from London, recalls how bacteria infected her digestive system and began eating through her intestines after “boring” snack on romantic trip

After packing in our jobs and travel the world together.
Our first destination was Bangkok and, excitedly, we headed out for a bite to eat.
All the traditional Thai dishes smelled fantastic and looked wonderfully exotic.
But I’d heard horror stories about food poisoning from street food, so I decided to stick to chips and mayonnaise.
Boring, admittedly, but I thought it best to play safe.
I felt pretty grim the following morning but put it down to jet lag.
Two days later, however, I was bedridden and really suffering.
I was pale, sweating and having terrible tummy trouble. It was clear I had food poisoning.
At Richard’s insistence I saw a doctor and was sent away with antibiotics.
The next day was my birthday. We had planned a great night out – a fantastic meal, with cocktails and dancing.
But it was not to be. I took a turn for the worse and my stomach cramps became unbearable.
It was a terrifying experience – being rushed around, with doctors asking me questions in Thai and broken English.
The pain was getting worse by the second.
Richard and I held each other, anxiously awaiting results of blood tests and scans. Then, suddenly and without warning, my belly was wiped down by nurses.
I was being prepped for surgery – and panicked.
Rich called his dad, a doctor in the UK, and he Skyped the Thai surgeon to find out what was going on.
It took just a few moments for him to work out that I had contracted a rare strain of salmonella, sometimes found in mayonnaise, which had triggered ulcerative colitis.
The bacteria had already started to eat through my intestines. Rich’s dad told us that, without the surgery, I could be dead in a matter of hours.

I went in for the operation at twenty past midnight… shortly after Rich and I had said what we knew might be our final goodbyes. Amazingly, I survived a dangerous eight hours of surgery.
I came out minus around 20cm of bowel, then spent two weeks recovering in intensive care.
I would never have believed something as innocuous as mayonnaise could be riddled with a flesh-eating form of salmonella, let alone that it would very nearly kill me.
After returning to the UK, life returned to normal and Rich and I got engaged. We married in 2015. Our son Arlo was born in 2016 and we are now expecting a second baby – a little girl.
Despite our dream trip turning into a nightmare, it made Rich and I realise how much we loved each other.
I haven’t touched mayonnaise since. But that’s a small sacrifice – I’m just happy to be alive. MM – EP 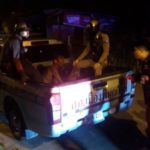