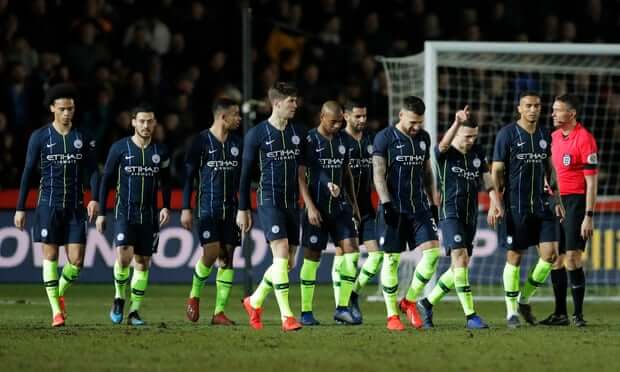 For the first time in the history of the English FA Cup, these games would be decided on the day with extra time and penalties if teams are level after 90 minutes.

Before the game, Newport County boss Michael Flynn commented that if his side could knock Manchester City out of the FA Cup it would be the biggest shock in the competition’s history.

Manchester City, with 46 goals scored in all competitions since Christmas Day, are rated not only the best side in English football but in Europe as well in many people’s eyes.

Newport kept the team that beat Middlesborough in the last round whilst City made seven changes from the team that beat Chelsea 6-0. In came Danilo, Nicolas Otamendi, Riyad Mahrez, David Silva, Phil Foden, Leroy Sane, and Gabriel Jesus.

For Newport, Padraig Amond had scored in every round of the FA Cup this season.

With 9,680 fans, crammed into Rodney Parade, Newport had a great chance to snatch the lead in the in the 14th minute. A long throw from the right found it’s way to Tyreeq Bakinson at the back post just inside City’s six-yard box. Keeper Ederson pulled off a good save but Bakinson should have done better with his header.

City showed that if you’re good enough you can play on any pitch and they showed a lot of quality in that half. Sane hit the bar and they had a good shout for a penalty in the 42nd minute when Newport defender Mark O’Brien blocked Sane’s shot with his arm.

Six minutes after the restart Sane picked up a pass on City’s left from Jesus where he cut in and fired passed Newport’s keeper Joe Day. Day should have done better. On 75 minutes Day would have been disappointed again as Foden cut in from the right and scored from just inside the box.

In the 88th minute, Amond found space between City’s Aymeric Laporte and Otamendi where he lobbed the ball over Ederson providing fresh hope that Newport could snatch something from this game right at the end. A minute later Foden, this time cutting in from the left, fired passed Day to put those hopes to bed. Mahrez made it four in the 90+ 4th minute.

For City, Phil Foden looked good and now has five cup goals for City. Each time Pep Guardiola plays him he’s asking serious questions about whether Pep should play in on a more regular basis. He’s definitely knocking on the door.

If you have any comments or questions please follow the links below and press like if you want to. Thank you.