Harry Kane returned for Spurs but despite scoring his team went down 2-1 at Burnley. At the other end of the table Crystal Palace, with an emphatic 4-1 win at Leicester, edged closer to safety as did Burnley and Newcastle who beat Huddersfield 2-0.

Norwich, Sheffield United, and Leeds United all won with Sheffield’s away win at West Brom the most impressive.

Leaders Luton didn’t play yet but remain top. Sunderland are edging closer to 2nd place after their 2-0 win at Bristol Rovers.

Lincoln remain in front after their 2-0 win at Morecambe. 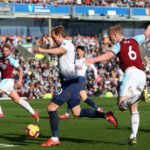