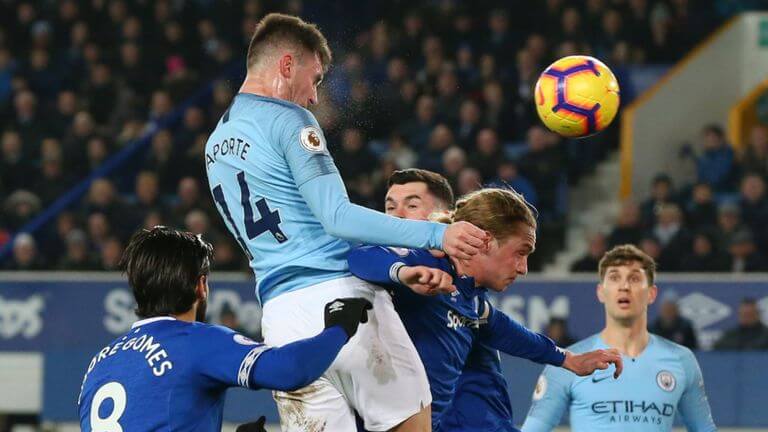 Manchester City Back on Top of the Barclays Premier League

Stoppage time headers in each half saw Manchester City climb back to the English Barclays Premier League summit for the first time in two months as they comfortably saw off Everton at Goodison Park last night. Not too long ago Liverpool had a ten point lead. Now they’re locked together on 62 points with City taking the number one spot with a goal difference of 48. Liverpool, with a game in hand, are on 41. That game in hand is away to Manchester United on February 24th.

Many Liverpool fans could well have been in the strange position of wanting Everton to win last night and former Everton player Leon Osmon said that he hoped Everton won and City won the title. Had that happened City’s task would have been a lot harder.

After a dreadful display at home to Wolves last time out team manager, the under fire and the current second favourite to be fired in the Premier League’s sack race Marco Silva, made five changes which included benching £100M pair Gylfi Sigurdsson and Richarlison.

The changes seemed to work for Everton who put in a much-improved performance without looking like they would trouble City who enjoyed 61.20% possession. City, with 18,165 completed passes this season, sit at the top of that particular Premier League table as well. Guardiola’s players certainly know what they have to do with the ball at their feet.

City’s defender, Aymeric Laporte who joined the club from Spain’s Athletic Bilbao for £57M at the end of January 2018, now seems to be Guardiola’s first choice defender.

Born in Agen, France the 24 year old Laporte represented France, at youth level, 51 times scoring three goals. In 2015, frustrated at not making the French senior squad he said he would consider playing for Spain if not selected for the 2016 European Championships. That didn’t happen and in August 2016 he began the process to play for Spain. A month later he received a call to join the French squad for World Cup qualifiers against Bulgaria and the Netherlands. At that point, he stated that he wanted an international career with France and his country went on to win the 2018 World Cup. Laporte didn’t figure in either of those two qualifiers and is still not capped at senior level. Real Madrid’s Raphaël Varane and Barcelona’s Samuel Umtiti are keeping him out of the side.

Against Everton Laporte had a fine chance to open the scoring in the 16th minute. Ilkay Gündogan swung over a corner which Laporte met at the back post from six yards out. His header went just wide. He made amends in the 2nd minute of first-half added time. David Silva, who must be in with a shout of PFA Footballer of the Year, delivered a perfect free kick from Everton’s right that Laporte met with a firm header from eight yards out. That’s Laportes 2nd goal of the season and the 19th that Everton have conceded from set-pieces this season in all competitions. They are the Premier Leagues worst offenders!

In the second half, Everton huffed and puffed but never looked like troubling Ederson. In the 90+ 7th minute, City substitute Kevin De Bruyne put fellow sub Gabriel Jesus through for a one on one with Everton keeper Jordan Pickford. Pickford saved but the ball ballooned up and Jesus headed into an empty net despite a desperate attempt from Kurt Zouma. That’s the 2nd time this season that Jesus has entered Everton’s ‘Land of the Giants’ penalty box and scored with headers.

Brighton Though to the Emirates FA Cup 5th Round