Home » Brighton Though to the Emirates FA Cup 5th Round

Brighton booked their place in the FA Cup 5th round last night with a hard-fought victory away to West Brom. They will now host Derby County in the next round.

Bartley the Hero & the Villain

First time around these sides played out a goalless draw at Brighton’s Amex Stadium and that’s how the tie stayed for 76 minutes last night. Although both teams hit the woodwork in the first half. Leon Balogun for Brighton and Hal Robson-Kanu for West Brom.

In the 77th minute, West Brom defender Kyle Bartley, up from the back for a free kick on Brighton’s left, volleyed in from about three inches. He actually had one hand on the goal post. Balogun, who might have been fouled by Bartley, should have done a lot better.

Five minutes later Bartley became the villain as his poor defending let in Brighton’s Romanian forward Florin Andone who’s shot slipped through keeper Jonathan Bond’s legs. West Brom will have felt aggrieved by that as Andone, could well have been sent off in the 1st half, after catching Sam Field in the face with his elbow. Referee Paul Tierney took no action.

So to extra time and Brighton’s Premier League top scorer this season with ten goals, 35 year old Glen Murray, entered the action in the 101st minute. Sixteen minutes later he’d killed the tie off with two goals. His 1st which came in the 104th minute, looked to come off his right thigh from about two yards. In the 117th minute, Murray found himself in space inside the box and he lifted his shot into the top corner for a fine finish. 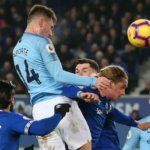 Manchester City On top of the Barclays Premier League Again