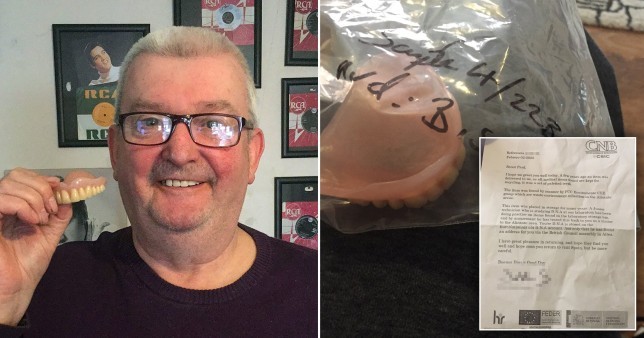 We’ve all been there. You’ve had a heavy night out on holiday, everything gets a little hazy and you embarrass yourself by hurling your guts up. Nice.

For Paul Bishop, that unfortunate error back in 2011 ended up being pretty expensive – as he vomited his false teeth into a bin while doing it.

But the 63-year-old, from Tameside in Greater Manchester, was left ‘stunned’ when his dentures were posted back to him more than a decade later.

He said he was on an all-day drinking session with friends in Benidorm, Spain, when he threw up outside a bar.

He said: ‘It was my mate’s 50th birthday and we’d been out drinking since midday.

‘It was about 11pm and I’d had nothing to eat all day. We had a lot of beer, so I had a pint of cider instead.

‘I had half of it left when my mates said we were moving on. I washed it down in one but could feel it coming back up.

‘As we were leaving, I noticed this big green bottle bin so sloshed it all out.’

He said he only noticed his top set of false teeth was missing when the friends reached the next bar – so quickly returned to look for them.

Paul added: ‘One of the lads said, “Where are your teeth?”

‘I realised it must have been in the bin. We went back but there were hundreds of bottles in there.’

He returned to look again the next morning, but the bin had been emptied. He was forced to spend the rest of the trip going around with no teeth.

‘I’d taken my Elvis suit and promised my mates I would sing, so I had
to do it with no teeth in,’ he said.

‘Everyone thought it was hilarious.’

He spent £600 on a new set of dentures once he returned to the UK – then swiftly forgot all about it.

Until this week – when he was confused to see a parcel from the Spanish authorities arrive through his letterbox in Stalybridge yesterday morning.

There was a letter addressed to ‘Senor Paul’ which revealed his teeth had been found in landfill, placed in storage for several years and then DNA tested to discover his identity.

The letter added: ‘I have great pleasure in returning, and hope they find you well and hope soon you return to visit Spain, but be more careful.’

Paul admitted he thought it was a ‘wind up’ at first.

‘I couldn’t believe it,’ he said. ‘I was stunned. I’ve moved address since 10 years ago.

‘Someone has gone out of their way to trace me. They are in perfection condition and look brand new.

‘Someone has obviously taken the time to scrub them.’

He said they no longer fit, but he is considering putting them on display at the Ridge Hill Working Men’s Club, where he is the general manager.

‘I can’t wear them because they’re twice as big as the ones I’ve got now. I might put them in a little glass container.’ 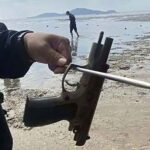 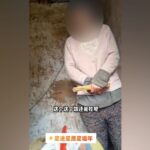