Home » Video news :Man Heroically Jumps Headfirst Into Moving Car To Save Driver Having A Seizure

Check out this amazing dash cam footage of a man jumping into a car window to save a driver having a seizure at the wheel:

What a bloody hero – especially considering that if most of us saw a car careering out of lane on the road our first instinct would be to swear profusely and shake our first in the air.

But nope, this dude gets out of his vehicle, runs over and does a James Bond dive straight through the passenger side to help the driver, and, in turn, others on the road at the time.

The incident took place in Dixon, Illinois, last June – and soon after it transpired that it was 39-year-old Randy Thompson that we had to thank for the bold move.

According to The Washington Post, Randy had spotted the other car creeping through a red traffic signal at a busy intersection, and threw his truck into reverse before running over to the passenger side of the moving car.

Randy realised that the driver was having a seizure and, thankfully, he knew exactly what to do.

“He had his arms up by his chest,” he told the Chicago Tribune.

“I didn’t know if the guy was gonna push the gas, jerk the wheel or whatever, so I waited as long as I could to back up.

“Once he got about a half-car length away from me, I parked my truck at an angle and jumped out of my vehicle.”

He added: “I was worried, but I would do that for anybody. It just happened to be I was at the right place at the right time.”

A statement from Dixon Police Department confirmed what happened, thanking Randy for his ‘heroism and for coming to a complete stranger’s aid’. 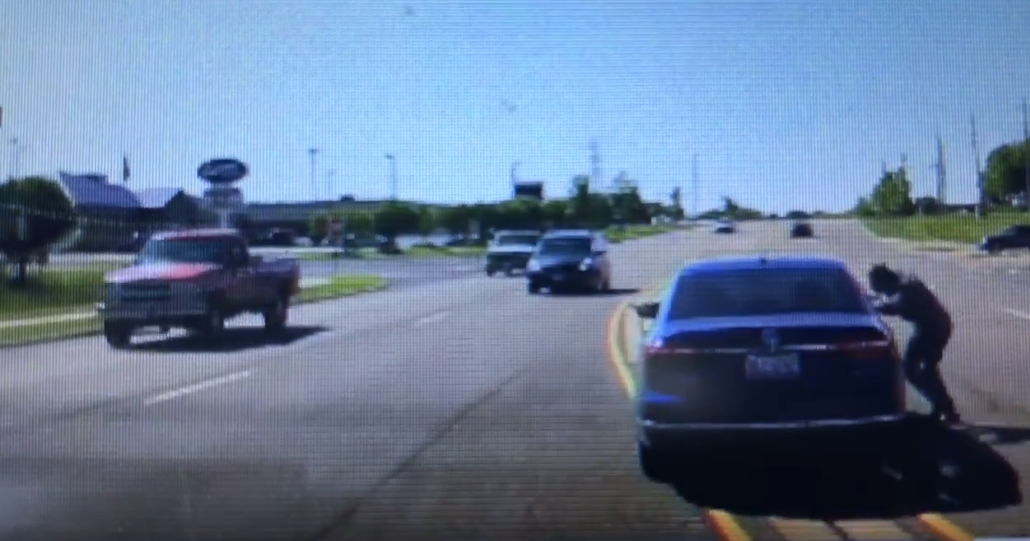 The footage has now surfaced in a Reddit thread where people have nothing but praise for the man.

“That dude just straight jumped into the window of a moving car to save a complete stranger, a wholesome madlad,” one person wrote.

“We need more people like the guy in the truck,” another said.

Referring to what happened as something straight out of Dukes of Hazzard, ‘Randy‘ was clearly totally amped up on adrenaline – captioning it in one frenetic sentence: “Wow I just saved this guy’s life in the blue car i jumped in his car he was having a seizure at the wheel the cops said they saw me jump in his window like Dukes of Hazzard it was crazy I saw him coming at me so I backed up real fast to the side and jumped out and jumped in his car to stop it wow my adrenaline is still going.”

Potential life-saving aside, let’s also applaud the fact he was able to jump in with such grace. There are few of us that could have achieved that in one fluid movement without just getting completely stuck.

Video News :Woman Begs Police She Is Too ‘Pretty’, ‘Thoroughbred and White’ To Be Sent To Jail

Video News : Car Thief Outed By Cows After Trying To Hide In A Field