Thai Baht Is Brought Back to Earth…

Police in Thailand have arrested a male model accused of taking an unconscious woman home, boasting online about his sexual exploits, and leaving her lifeless body in the lobby of his building.

Police brought charges of illegal detention leading to death, abduction with the intent of committing an indecent act, and molestation against Ratchadech Wongtabut in a widely discussed case.

The victim, Thitima Noraphanpiphat, made a living as a “pretty,” the term for young women hired for events such as auto shows to pose seductively with products they are promoting.

Thitima, also known as Lunlabelle, was hired to attend a party from which Ratchadech left with her.

A media frenzy over the case has been fueled by the suspect’s online posts and surveillance video showing him carrying the apparently unconscious victim.

The 24-year-old Rachadech was arrested on Tuesday night as he filled the tank at a gas station on Ratchadapisek-Tha Phra Road with his mother in the car.

Rachadech, who was identified as the last person to be with the victim, denied the warrant’s three charges of alleged illegal detention resulting in another person’s death, taking away another person for a lewd act and molesting another person. 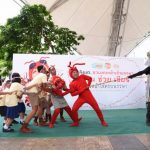 ONE IN 10 THAIS HAVE MARITAL PROBLEMS DUE TO ALCOHOL, SURVEY SAYS

Thai Baht Is Brought Back to Earth After a Winning Year in...

Mark KellyJanuary 27, 2020
The Thai baht has gone from being Asia’s top-performing currency in 2019 to dead last...
END_OF_DOCUMENT_TOKEN_TO_BE_REPLACED