Sukhothai, the kingdom’s ancient capital, officially kicked off Loy Krathong Light and Candles Festival yesterday (Nov 1) amid the eyes of thousands of local and foreign visitors.

The province became the first venue to start the Loy Krathong festivities featuring the lighting of dainty flower shaped floats, candles and fireworks lighting the night sky of Sukhothai Historical Park. The Loy Krathong Festival started after the governor of Sukhothai rang the traditional bell that resonated within the ancient historical park. It is the 40th year of such celebration of the light and candle festival in this northern ancient city. The festival will run until November 5th. The celebration yesterday started in the day and involved colorful parades of floats in various designs and sizes of the traditional Loy Krathong usually in the shape of fanciful and colorful lotus flowers.

All nine districts within the province have sent in their contribution to the parade with their interpretation of the Krathong or floats which emphasized on environmental-friendly materials to make the floats. The parade marched past Wat Channa Songkram temple within the historical park while visitors and tourists alike watched the beautiful floats pass them in awe. It also included a procession of historical traditions and culture, a representation of Sukhothai life which flourished in the 13th and 14th centuries and where many historians believe the tradition of Loy Krathong was first celebrated. Grand performances were also conducted at night, including traditional Thai music, Khon or masked dance performance, and Noppakao Pagent contest. Folk dancing that depicts the traditional Sukhothai life is also held.

Also part of the festivities is the depiction of an ancient traditional market where wares and products are bought and sold using cowrie shell money (the traditional form of currency in the 13th century). A large number of visitors came to the historical park with their floats made from either banana or palm leaves and decorated with flowers, candles and joss sticks to set off onto the large ponds in this historical site. They make wishes for the year ahead and seek forgiveness to the Mother of Rivers for any grievances they may have caused before setting off their floats. Source: Thai PBS 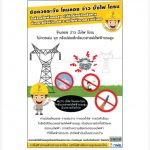