A woman was yesterday (Nov 1) arrested by police for using fake 1,000 baht banknotes to shop at a fresh market in Kham Muang district of Kalasin province.

The woman, Mrs. Kesinee Nualbutrdee, was taken to Kham Muang police station and charged for using and having counterfeit money in possession. Food vendors at the market alerted the police after she paid them with the counterfeit money. Police went to the market where she was still seen shopping with the fake money. A search of her handbag showed nine fake 1,000 banknotes were inside. Police said she had used counterfeit money to shop several times in the past and they believed she is a member of the forgery gang.
They are investigating and hunt down others in the gang.  Source: Thai PBS 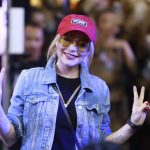 Lohan was in tears at fan meeting in suburban Bangkok