A mother in Nakhon Ratchasima broke down and collapsed after seeing her daughter hit and killed by a speeding pickup while crossing a road to catch a bus on Tuesday morning.

The accident happened at 8.15am on the Mittraparp road, in front of Moo 1 village in Tambon Don Chomphu in Non Sung district, police said.

They said Saichon Srichai, 40, had ridden her motorcycle to take her daughter, Chansiniee, 16, to the front of the village, where she crossed the road to catch a bus to her school in Mueang district.

The girl was a second-year student at Nakhon Ratchasima Vocational College, studying accountancy.

While the mother was watching Chansinee cross the road, a speeding pickup came from nowhere, hit her daughter and hurled her body several metres along the road. She died at the scene.

Saichon screamed and collapsed again and again, although she was revived by people at the spot.

The pickup stopped about 15 metres from the accident.

Police took the driver, a male, away to face charges at Non Sung police station. 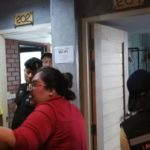