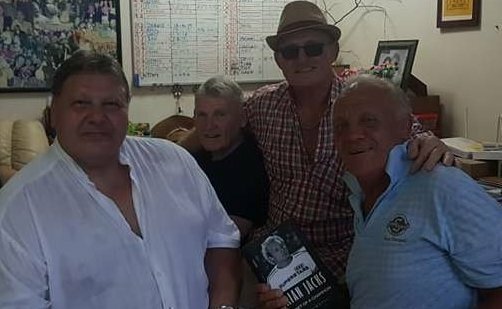 Brian Jacks And A Few Of His Judo Mates!

Brian Jacks has been a resident of Pattaya for many years and he’s built his own apartment block which he’s called View Dee. It’s 62 rooms, located on the Dark Side, and is very popular with ex-pats from all over the world.

For anyone that doesn’t know Jacks did a bit of judo in his day and he’s probably one of the most well-known judo players that the UK has ever known. He took part in three Olympic Games and one Pre Olympics. In the Ill-fated 1972 Munich Olympic Games he won a bronze medal. He also won a World Championship Bronze at the Salt Lake City games in 1967.

He won many British and European Championships but he didn’t become a household name until the twilight of his career when he appeared in Superstars. Many considered him to be the first professional superstar and for two years he was unbeatable in the UK and Europe.

In the main picture Jacks is sat on the right holding his book which you can still buy, from him, and he says:

In the white shirt is Angelo Parisi who’ been a mate of Jacks for many years. Jacks along with his father Albert helped train Parisi in the early days. They knew, very early on, that he had the potential to win a heavyweight Olympic Gold medal for Great Britain.

In 1972 he won a Bronze medal at the Munich Olympics and the gold came eight years later in Moscow. But by that time of his career, partly due to Jacks, he’d switched his allegiance to France.

Angelo Parisi. Born in Italy, trained in England, and a Gold medal for France.

Ian Guthrie and Clive (in the hat) Douglas make up this judo quartet and they both have fine judo reputations as well. Guthrie was in the British Olympic squad for the 1972 games and Douglas has featured in British squads as well.

They are experienced professionals in one of the toughest sports in the world but I’m not going to mention their Dan Status as I’m not sure how relevant that is.

Jacks himself calls himself a ‘Desperate Dan’ and if he’s an 8th 9th or 10th Dan that doesn’t seem to matter to him. Those in the know fully understand that he should be a 10th Dan and he is with some associations. Maybe an MBE, or something like that, should have happened by now as well!

Jacks has always preferred to do things his way and he’s been known to ruffle a few feathers with his outspoken personality. In the judo world, during his day, he put bums on seats and there were those who loved him and those that didn’t.

During the Brian Jacks 100 day UK tour, 2017/2018, we heard more than a few stories related to how well known judo personalities were milking the British Judo Association system. But you get that in all walks of life where people have been in a position a long time, and although they are no longer productive, they still like to take a large slice of the pie.

On The Other Side Of That!

We came across loads of people who were doing a fantastic job and really putting in a huge effort to keep British judo alive. The following people  and I’m sorry if I’ve missed anyone.

We did have one funny experience when we were in Worcester and we just wanted to go to a nearby club to say hello. I thought it might be interesting for the kids to meet an Olympic judo medalist (men) and there aren’t many of those. We were told the session finished at 20:00 and not to arrive before that as it might put the kids off!

It could have been Kidderminster and maybe the kids could have learned something if we’d have arrived 30 minutes earlier! Political correctness!

The judo titans are in Pattaya for a couple of weeks and if you’re a judoka, who would like to meet Dan’s who really are Dan’s and didn’t get their grades with green shield stamps, come and say hello.