A 45-year-old Thai man was arrested on Sunday morning for allegedly stabbing to death his love rival and wounding his ex-wife while the victims were sleeping at a relative’s house in Sa Kaew province.

He allegedly confessed to have committed the crime due to jealousy, police said.

Suspect Thongdee Surakhan – against whom police filed charges of premeditated murder and attempted murder – was arrested at 8am at a roadside spot on Suwannasorn Road in Tambon Huai Jot, Wattana Nakhon district, after he had earlier abandoned a Honda motorcycle at Wat Noen Jik at 4am in an alleged attempt to hoodwink the police.

The man allegedly barged into the house of Phai Kiatnok in Tambon Wattana Nakhon to stab his relatives – Phromma Chaiyan, 50, and Phromma’s new wife Praiwan Surakhan, 44 – at 1am, resulting in Phromma’s death from injuries in hospital while Praiwan was injured.

Praiwan identified Thongdee, her ex-husband with whom she had two children, as the assailant. The two had separated six months ago, said Wattana Nakhon deputy superintendent Pol Lt-Colonel Somchai Yoora. 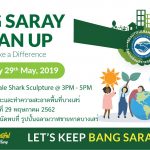