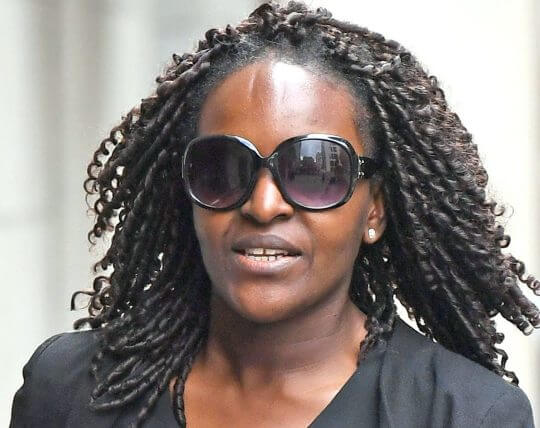 Fiona Onasanya is expected to become the first MP in history to wear an electronic tag in the House of Commons when she is released from prison.

The shamed politician, 35, was locked up for three months after being found guilty of lying to police about a speeding offence.

But despite being expelled from the Labour Party she has refused to quit as the representative of Peterborough and will continue to get her £77,379 salary while behind bars.

Legal experts have said it is possible she could only serve four weeks of her sentence before being released under home detention curfew, where she will be tagged to make sure she stays in her home between certain hours.

An unnamed Labour MP told the Mirror: ‘She’s highly likely to be out within four weeks and put on a tag, so there’s nothing stopping her voting. ‘She’s said she’s going to stay on as an MP so we’ll be walking through the division lobbies with someone wearing an electronic tag. ‘It’s a joke.’ Onasanya was jailed after being caught driving at 41mph in a 30mph zone in her constituency on July 24.

She tried to collude with her brother Festus, 34, to avoid the speeding ticket, naming Aleks Antipow – an acquaintance of Festus – as the driver. But Aleks was in Russia at the time of the offence so could not have been behind the wheel at the time.

Festus was jailed for 10 months after pleading guilty to his part in the plot. In the wake of her conviction she has appealed her sentence, but she could even see it increased following a complaint that it was too soft.

A spokesman for the Attorney General’s Office said: ‘We have received a request for the case of Fiona Onasanya to be considered under the unduly lenient sentence scheme.

‘The Law Officers have 28 days from sentencing to consider the case.’ Parliamentary rules require the removal of an MP who is jailed for 12 months or more.

But if the sentence is less than that a recall petition can force a by-election if it is signed by more than 10% of the electorate in the Cambridgeshire seat.