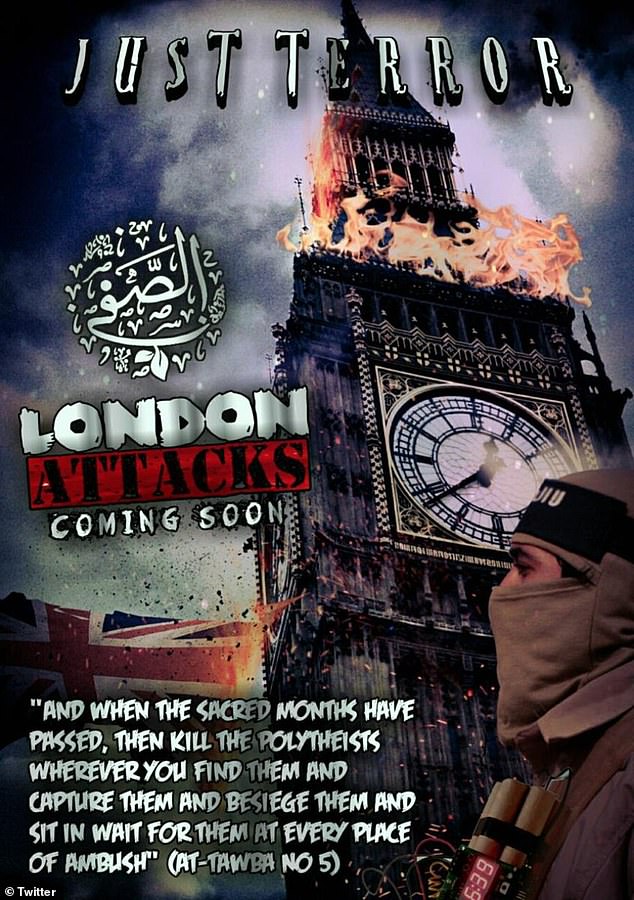 One poster depicts a suicide bomber standing in front of a burning Big Ben and is captioned with the warning: ‘London attacks coming soon’.

Another shows a masked terrorist wielding a knife above New York city and a rallying call for lone extremists to ‘fight them in your country’.

Both posters use ‘Just Terror’ as a tagline, while the threat to London appears alongside a quotation from the Koran’s At-Tawbah 5 – or the ‘Sword Verse’.

‘And when the sacred months have passed,’ it reads, ‘then kill the polytheists wherever you find them and capture them and beseige them and sit in wait for them at every place of ambush’.

Allah will bring forth in place of them a people he will love and who will love him… who are humble toward the believers, powerful against the disbelievers… they strive in the cause of Allah and do not fear the blame of a critic.

‘That is the favour of Allah, he bestows it upon whom he wills. And Allah is all-encompassing and knowing.’

The propaganda posters were created by the Ash Shaff Media Foundation – a pro-ISIS outlet and posted to Twitter by the Terror Research and Analysis Consortium (TRAC) – a terrorism watchdog.

The sight of Big Ben ablaze is reminiscent of images of last month’s fire that destroyed the roof and spire of Notre Dame cathedral in Paris, after which ISIS-affiliated groups released posters calling the disaster ‘retribution and punishment’ and telling western countries to ‘Wait for the next’.

The image showed the eight jihadi attackers above Donald Trump, Pope Francis and Buddha on fire.

It was captioned: ‘We will not make you cry of blood, enemies of religion and the first of the clouds shall fall upon the rivers of your unclean blood.’

ISIS claimed responsibility for the Sri Lanka attacks, which killed more than 250 people in churches and hotels in the capital Colombo. 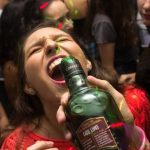