AN abused wife knifed her husband and told a 999 handler that she tried to stab him through the heart but that “he doesn’t have one”, a court heard.

Penelope Jackson, 66, allegedly stabbed her husband David, 78, at their home in Berrow, Somerset, on February 13.

On the first day of the trial at Bristol Crown Court yesterday, the 18-minute call was played for the jury.

The victim managed to call the emergency services, telling an operator that his wife had stabbed him.

The defendant then grabbed the phone and told the operator calmly: “I’ve killed my husband, or tried to because I’ve had enough.”

Jackson claimed she needed a way out of what she described as an “abusive relationship”.

“I might go and stab him again,” Jackson said on the call.

“I am in the lounge, he is in the kitchen bleeding to death with any luck.”

She said she had put “three holes in him” and added: “He is getting a bit slumpy.

“He threatened me before, but he’s not threatening me now.”

When the 999 operator asked for her husband’s whereabouts she said: “He is in the kitchen bleeding to death with any luck.”

Jackson refused to help her husband, who she had been married to for 24 years, when the 999 handler asked her to apply pressure on his wounds.

“I know this is being recorded. I am compos mentis, but I have had enough of the abuse and the nastiness. I am not doing anything to help him.

“He deserves everything he has got – I accept everything that is coming my way. I might just go and do it again.”

She added: “Once I thought I had got his heart, but he hasn’t got one. And then twice in the abdomen.”

The trial heard that police had been called just before Christmas last year when he grabbed her by the arm and left her with bruises in a row sparked about the volume button on a remote control.

The defendant told the operator they had been on a zoom call with their daughter and son-in-law and had a lovely meal before he “went off on one”.

Asked by the paramedic if she meant for him to die, she responded: “Not when I started, but now I just want a way out.

“I’ll end up in prison but that is preferable to my life now.”

Police officers then arrived and arrested her on suspicion of murder.

David couldn’t be saved and died as a result of stab wounds, a post mortem later revealed.

Prosecutor Christopher Quinlan QC told the trial: “It was about 9 o’clock on the evening of 13 February when David Jackson telephoned the emergency services and told them he had been stabbed.

“She said his wife had stabbed him.

“She took over the call from David and thereafter for 18 minutes she was calm, resolute and, in her words, not mine, compos mentis.

“She persistently refused to follow the operator’s instructions including the paramedic who came onto the call to try and save her dying husband.

“Police attended with a doctor to try and his save life but the blood loss was too great.”

The jury heard the defendant had been charged with murder, which she denies, but she had accepted manslaughter.

The trial, which is expected to last two weeks, continues. 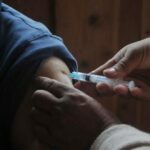 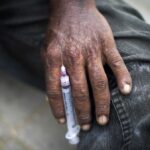 Drug addict gets away after shooting father