Mabel Goo was just going about her duties as an AirAsia flight attendant during a flight from Kuala Lumpur to Hong Kong, unaware that an admiring passenger had snapped a few pictures of her and posted them online, garnering her instant global fame.

Goo, 24, was seen serving passengers by the trolley cart on the Oct 12 flight when a passenger, George Wong, snapped two pictures and posted them on his Facebook page the next day.

He accompanied the pictures with this comment: “Affordable fares with incredible scene, what else to blame.”

The posting was shared more than 4,000 times and liked more than 2,000 times. It even caught the attention of Britain’s Daily Mail.

However, some Facebook users criticised Wong for secretly taking photos of Goo, saying he should not have taken her pictures without permission.

Goo is floored by the explosion in interest from all over the world, though apprehensive above some of the undesirable comments.

“I am told it has gone (viral) across China and even the UK. But I’d like to focus my attention more on my work with AirAsia,” said the 24-year-old when contacted.

The Ipoh-born said being a cabin crew member in AirAsia has always been her goal since secondary school.

She has pursued a degree in business but opted to take to the skies to live out her dream.

Goo has been serving in AirAsia as part of its cabin crew Fun Team for almost one-and-a-half years. According to AirAsia, its Fun Team plans entertainment games on board 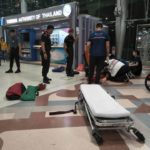