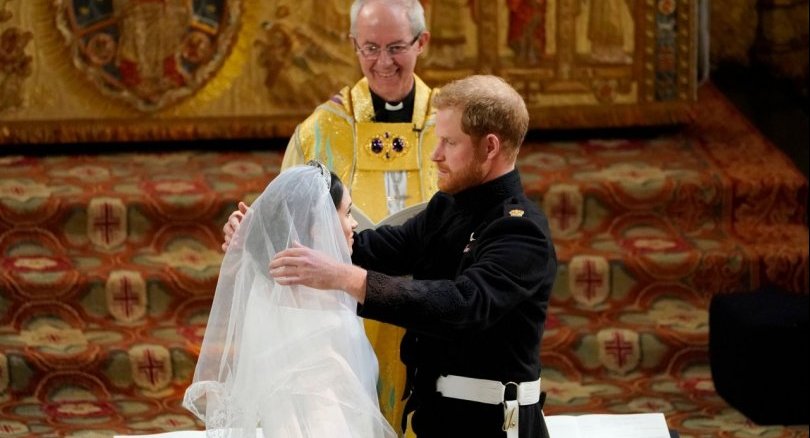 US TV star Meghan Markle joined Britain’s Prince Harry at the altar on Saturday wearing a flowing white dress in front of a star-studded congregation as tens of thousands of fans cheered in the street and millions watched around the world.

Harry and the bride’s mother Doria Ragland looked visibly moved and the couple held hands as they exchanged vows in a ceremony led by Archbishop of Canterbury Justin Welby.

Harry’s 92-year-old grandmother Queen Elizabeth II and her husband Prince Philip were in attendance as Markle arrived in St George’s Chapel in Windsor Castle, wearing a long white veil and a glittering tiara.

The 36-year-old bride walked up the aisle on her own before being joined half way by Harry’s father Prince Charles. Her own father pulled out amid a media row that overshadowed the meticulous palace preparations.

Tens of thousands of well-wishers cheered as Harry arrived at the church with his brother and best man Prince William, both wearing dark military uniforms.

Well-wishers camped overnight to secure the best spots to watch the newlyweds, who will take a ride in an open-topped carriage around Windsor after the ceremony.

Many in the crowds offered particular good wishes to the bride after her father had to miss the wedding due to health problems and a scandal over staged paparazzi pictures.

“After the week she’s had, she needs some support,” said Karen Wallace, 53, from Chicago, one of an estimated 100,000 members of the public attending the event.

The service in St George’s Chapel at noon (1100 GMT) was to mix traditional Church of England ceremony with gospel music, with a choir singing “Stand By Me”, while a US pastor will deliver the main address.

Markle’s ring has been made with Welsh gold, as is traditional for royal weddings, while Harry’s will be made of platinum.

Queen Elizabeth before the wedding conferred the title Duke of Sussex on her grandson Prince Harry, meaning Markle will be known as the Duchess of Sussex.

Harry’s ex-girlfriends Chelsy Davy and Cressida Bonas were also among the guests, along with singer James Blunt, US talkshow host James Corden and Markle’s former co-stars from US television series “Suits”.

Windsor was decked out with flags and bunting, and there was a carnival area on the Long Walk, the sweeping tree-lined avenue down which the royal couple will drive.

Thousands of fans arrived at dawn, bearing rugs and picnics, Union Jack flags and royalist paraphernalia, and the prosecco was flowing freely well before the first guests arrived.

“We planned to stay in a hotel but we got caught up in all the excitement and we stayed here last night, unprepared,” said Karen Long, from Texas.

She said the fact that Markle was mixed-race was a huge moment, saying: “We all wanted to be a princess, we thought we couldn’t and there she is, breaking all the barriers!”

Her father Thomas Markle, recovering from a heart operation in Mexico, still appears in the printed order of service.

The Emmy Award-winning former television lighting director was caught in a fiasco, posing for staged photographs after complaining of media harassment, then performing several U-turns over whether he would attend.

Before they retired for the night in separate hotels, Harry, 33, met fans outside Windsor Castle where he said he was feeling “great”, while Markle said she felt “wonderful”.

The couple met on a blind date in July 2016 and had a whirlwind romance, criss-crossing the Atlantic as she continued filming in Toronto.

The Archbishop of Canterbury Justin Welby said they were “very sensible” and “self-possessed”.

“There’s profound affection between them which is wonderful and a deep understanding and mutual support,” he said.

Prime Minister Theresa May, who was not invited to the wedding, offered her “very best wishes” in a message on Twitter.

Prince Harry, the youngest son of the late Princess Diana, is one of the most popular royals, while Markle, a divorcee, is seen as a breath of fresh air for the monarchy.

“I think it’s really nice that he’s marrying someone that’s representative of modern society,” said Sam Lukes, 28, who came from nearby Reading to see the procession.

“They are going to change things,” said Irene Lennon, a 72-year-old from Edinburgh, wearing a black t-shirt with the British flag featuring the couple on it.

She and her sister Audrey Wilde, 66, were singing and laughing as they arrived in Windsor on the train, which has been labelled the “Royal Wedding special to Harry and Meghan Central.”

Retired nurse Cynthia Osborne, from Cardiff, was resplendent in a Welsh dragon hat and posed for a photograph for a US tourist.

“I think they’re a little bit envious of us, not just the Americans but the Europeans too,” she said of the international attention.

The event is a welcome respite for a country still burdened by austerity and divided over Brexit, although polls have indicated that only around a third of the population is interested in the wedding.

Despite the meticulous palace preparations, feuding in Markle’s fractious family has overshadowed the wedding build-up.

Her estranged older half-siblings, who have not been invited, have vented widely in the media.

Harry, a former army officer, has had his own troubles and recently admitted he was close to a breakdown at one point in his youth.

He was scarred by his mother Diana’s death in a Paris car crash in 1997 when he was just 12, and he had to mourn in the full glare of the world’s media.

Diana’s sister Jane Fellowes read from the Song of Solomon at the wedding, in a tribute to his mother.

The congregation was also to sing “Guide me, O thou great redeemer” — the last hymn sung at Diana’s funeral.