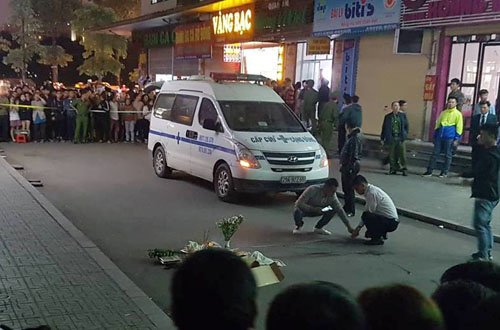 Hanoi student: Preliminary investigations have found that a 21-year-old woman threw her newborn baby from the 31st floor of a Hanoi building.

On the night of October 18, a man heard a loud thump between two buildings in Hoang Mai District, west of Hanoi. He went to see what it was and found a dead infant on the ground.

Police said that forensic tests indicate that the baby girl, weighing 2.7 kilograms, was alive at birth when she was thrown out of the building, contradicting the woman’s statement that it was stillborn.

She could be charged with murder or abandoning of a newborn, a crime punishable by up to two years in jail.

Anh has said that on the night of October 18, she was visiting her boyfriend in his apartment on the 31st floor of an apartment complex in Hoang Mai District when she noticed signs of labor.

She delivered the baby in the toilet, but saw no sign of breathing or crying from the infant, so she put it in a bag and threw it out of the ventilation window in the toilet, she told the police.

Her boyfriend and his cousin were present in the apartment, but were unaware of what had happened, police said.

The boyfriend said that their relationship had only begun a week earlier, and he was unaware of her pregnancy.

Police said Anh and her earlier boyfriend had broken up in February after a relationship of nearly three years. It was only in May that she realized she was pregnant.

She is in unstable health now and being treated in a local hospital, the police said, adding that she is yet to recover