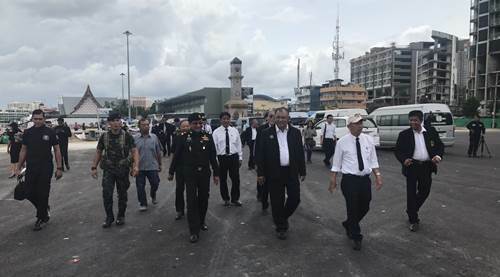 Government sends aid to see how Pattaya’s image is developing

On Tuesday August 15th, local authorities in Pattaya were pleased to welcome a top Interior Ministry aide who was visiting from Bangkok.

He had been sent by the Thai government, on a mission to find out the what, where, why, and how Pattaya’s image was changing according to their plans which have been put in place for some time now.

Mr. Natthapich Sanitwong Na Ayudhya was quick to point out the poor image of Pattaya and how it was paramount that the authorities are doing all they can to improve it.

He also addressed certian key aspects such as crime in the surrounding area and how it needed to be reduced hugely to meet expectations from the Thai government.

He also wanted to see how plans for the marina were progressing, said Manager.

Natthapich and his delegation were welcomed by the provincial governor and the mayor of Pattaya who outlined what measures had been taken so far in a meeting at City Hall.

The aide was then taken on a tour that included the planned marina area and park that is due to open at year’s end.

He re-iterated that Pattaya was predominantly a tourist resort and that Thai’s should be welcoming tourists here, giving them the best possible services so that they keep coming back.

Mother threatens to hang own child on live video