Yesterday we reported the story of Louis Makepeace, the teenager with dwarfism who claims he has recently been rejected from his college cooking course because his height poses a potential health and safety risk.

The 18-year-old, who stands at 3ft 10in, says that he had been offered a place on the Hospitality and Catering at Heart of Worcestershire College, but that college bosses have since backtracked on their decision – branding his dwarfism a ‘safety risk’ and a ‘disruption‘ to the other 14 pupils that he’d be working alongside.

Well, now his plight has reached celeb chef Gordon Ramsay, who’s stood up for the teen – not only by branding the college’s alleged behaviour as ‘disgusting’, but by also saying that he’d offer Louis an apprenticeship ‘any day’. 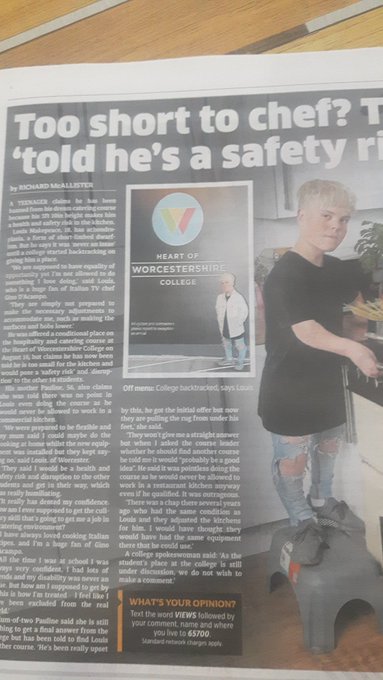 Mind you, it’s worth bearing in mind that Gord’s not actually offered him an apprenticeship and it’s all a bit hypothetical at this stage, meaning many called on him to see through in his word.

One person tweeted: “Do it! He will make a great chef, and will be a fantastic apprentice simply because he has the passion to do it. I really hope you give this young man a chance, and learning from you he could have a stellar career ahead of him.”

Another said: “Finish the fairy tale story and make it happen. Kid’s got that extra motivation and determination to do well to prove those wrong.”

The only thing is, while a gig (or non-offer, depending on how you look at it) with Chef Ramsay would certainly be impressive for any aspiring chef, it seems Louis would probably rather support from another big name – having said he’s a die-hard Gino D’Acampo fan. Soz Gordon.

Louis, who hails from Worcester, has a form of short-limbed dwarfism known as achondroplasia. But he says that his condition has never posed a problem – until now.

“All the time I was at school I was always very confident, I had lots of friends and my disability was never an issue,” he said.

“But how am I supposed to get by if this is how I’m treated – I feel like I have been excluded from the real world.

“My confidence is shrinking and I feel that people stare and laugh at me. People just think I’m still a kid and will push in front of me in queues.

“I just want to be treated as a normal person without them laughing at me and go around and do quite normal stuff.”

A spokeswoman for Heart of Worcestershire College said: “As the student’s place at the college is still under discussion, we do not wish to make a comment.”