Senior Thai policemen spoke to the press yesterday after a 26 year old German tourist was raped and murdered on a hillside in Koh Si Chang Chonburi.

Chilling CCTV pictures showed the victim out for a mid afternoon ride on a rented motorcycle.

Now it has emerged that she was still not dead after a frenzied attack by some stone steps leading up the hillside.

She was battered again after being dragged still alive for 50 meters in an effort to hide the crime.An impromptu re-enactment with a stand-in was conducted at police HQ.

Chalermkiat announced the arrest of 23 year old Ronakorn of Tha Thewawong district who has admitted to rape and murder.Chalermkiat said the crime happened about 3pm on Sunday afternoon. The body was found by a member of the public.

A man was seen coming down from the hill with blood on his clothes.He was found outside his house nearby and was seen to have wounds on his body.

He allowed officers into his house. Behind the house bloodstained clothing was found and he readily admitted what he had done.

He said he had seen the victim riding a motorcycle while he was high on methamphetamine or “ice” and he felt the need for sex.

He approached her and offered sex but she did not say anything and drove off. He followed her to the hillside where he raped her.

He then hit her repeatedly in the face and in the back of the head with a rock.

Bloodstains were found on a stone path leading up to the top of the hill.

She was still not dead and he dragged her 50 meters off the path where he continued to bludgeon her until she was dead.

Then he covered her body with stones, rocks and bracken in an effort to conceal the crime.

He tested positive for drugs in a test at his house and this was confirmed with a further test at Koh Si Chang hospital.

Ronakorn has been charged with rape, murder and concealment of a corpse and was detained by the Koh Si Chang police. 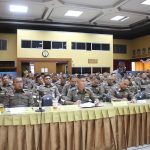 No time off for police over Songkran, while revellers warned not to drive after drinking

Video: NEVER stop in front of a truck