The German man who admitted to killing his Thai girlfriend early in July has been set his first court hearing in early October.

It was announced yesterday that German Nico Papke, who confessed to the murder of his girlfriend on July 18th, beautician Pischa “Lek Nampadung, 35, will make his first court appearance at the beginning of October.

It has also been confirmed that forensic results from blood found on a mattress inside in Pisha’s room in Chalong and in in the car rented by Papke, 35, match that of the victim.

Yesterday, Chalong Police Deputy Superintendent Lt. Col. Somsak Sopakarn said, “According to the forensic results, the blood stains inside the rented car matched Pischa’s DNA. Papke’s and Pischa’s DNA were both found in the car and in his rental home. The mattress stains of purge fluid inside Pisha’s rented room also matched her DNA,” he confirmed.

“They had rented that car earlier and went to Phang Nga together, before her death, so the car had a lot of both their DNA in it in general,” he added.

Papke now remains imprisoned and is awaiting trial. The case will go to court around the beginning of next month.

The case file was sent to the public prosecutor around September 1. However, the prosecutors have requested some additional investigation, which will take a couple more weeks to complete.

Papke, a fitness instructor, denied the murder accusation on July 10 when police notified him that he was under arrest for the murder of Pischa while he was laying in his hospital bed, after slitting his throat with a box cutter while police were on their way to arrest him.

Papke then confessed to the crime on July 18th, carrying out a crime re-enactment with Chalong Police on the same day. 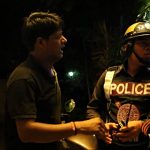