An intensive five-day police search paid off after a suspected murderer blew his cover by going on a spending spree while on the run.

Withun Sitabut, 39, was apprehended as he made a stop to buy food from a roadside vendor.

He confessed to killing Wannee Jiracharoenying, 58, for her money and stashing her body inside a refrigerator at her home in Chiang Mai’s Chom Thong district.

Mr Withun drove a songthaew passenger vehicle in Chiang Mai for a living before he quit the job to work as a chauffeur for Wannee, a native of Samut Prakan, who habitually made merit-making trips to temples in the North.

Mr Withun first met the wealthy woman when he drove her and other devotees in his songthaew around the temples in Chom Thong district.

Cash-strapped, he told police he had asked to borrow money from Wannee but she refused, which upset him. He then plotted to kill her.

On Oct 11, he broke into her house through the back door with the intention of robbing her.

He forced her to give him her ATM card and pin number, then beat her up and knocked her unconscious before leaving the house to make cash withdrawals.

After he took out the money from an ATM using the stolen card, he returned to the house to find the victim had regained consciousness, so he covered her head with a plastic bag until she suffocated.

He then went out again to get the materials he needed to conceal the body.

Mr Withun came back to the house with cement powder he bought from a local hardware store.

He placed Wannee’s body in her refrigerator and sprinkled cement powder over it, thinking the powder would preserve the body and mask the odour.

After killing Wannee, Mr Withun fled with his girlfriend, identified by police only as Nam.

They went to Bangkok together and rented a car to drive on to Rayong where they checked in at a luxury resort on Koh Samet and spent a lot of money.

He even posted pictures on his Facebook page of his luxury vacation on the island with the girlfriend.

After their holiday, his girlfriend returned to Chiang Mai. He saw her off at Don Mueang airport and then rented a room at a condominium in Bangkok which he intended to be his hiding place.

But as Wannee’s murder grabbed headlines, he travelled further off the beaten track to Nakhon Pathom to evade capture.

There, he bought a brand new 160,000-baht motorcycle, camping gear, a solar-powered battery charger and a map with the apparent intention of hiding out in a more secluded location.

In the meantime, he kept withdrawing cash on a daily basis from an ATM using the stolen card.

The police, meanwhile, secured a court-approved warrant for the suspect’s arrest on robbery and murder charges.

Given the weight of evidence against him, the warrant took no more than a day to obtain.

But tracing the suspect took a little longer.

The Provincial Police Region 5 initially mounted a search for the BMW X1 sport utility vehicle owned by Wannee, which Mr Withun had taken with him when he fled.

Police narrowed down escape routes the suspect was likely to have used and reviewed security cameras installed in those areas.

On Oct 27, police found the vehicle abandoned in roadside woodland in Saraphi district of Chiang Mai.

The investigation team later discovered that Mr Withun was still in regular contact with his girlfriend. She was then called in by police for questioning.

Police were able to conclude from interviews with Nam that even though she was trying to keep his guilt from them he was responsible for the murder.

The Crime Suppression Division (CSD) then stepped in and took over the manhunt for Mr Withun.

A team of four CSD detectives led by Pol Col Man Menyaem, chief of the CSD’s Sub-Division 4, began tracing the expenditures and withdrawals made using Wannee’s ATM card, which led them to the shop that sold Mr Withun the motorcycle in Nakhon Pathom.

The team learned that after Mr Withun bought the motorcycle, he drove it from Muang district of Nakhon Pathom to Lao Khwan district of nearby Kanchanaburi province before travelling on to Dan Chang district of Suphan Buri.

The man then headed to Nakhon Sawan through Chai Nat province.

During the chase, the police team worked out of a car equipped with gear to track the mobile phone’s signal mobile.

After two nights of pursuit, one of the four detectives spotted the motorcycle Mr Withun had bought driving past.

The team turned back and spotted the motorcycle parked by the side of the road and saw Mr Withun walking back carrying a bag of food.

They pulled over and rushed to stop the suspect just as he was about to ride away.

The police quickly placed him under arrest. He was carrying on him 1.2 million baht in cash he had withdrawn from Wannee’s ATM account and a gold necklace thought to have been bought using her money as well. 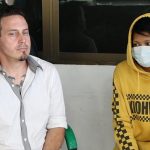 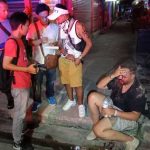 Another tourist beaten and robbed in Pattaya