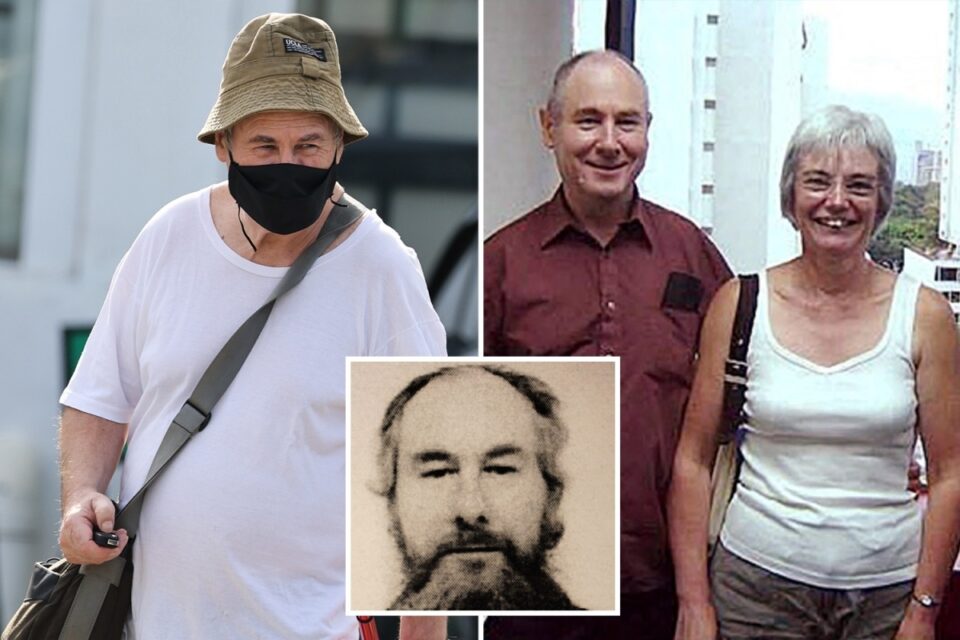 FRAUDSTER John Darwin has been spotted shopping in the Philippines just days before a real-life drama airs his crimes.

The notorious criminal plotted with his wife Anne to swindle almost £700k from life insurance and pensions by faking his death in the North Sea in a canoe in 2002.

Darwin, 71, has been shopping at a store called WILCON in Antipolo, Philliipines, wearing a face mask and bucket hat.

The crook reportedly refused to answer any questions when approached by reporters, and sped off in his £25k SUV.

Former teacher and prison officer Darwin is also understood to be looking to cash in on his crimes by writing a tell all book.

Mercy, Darwin’s second wife, 48, told The Mirror: “The book’s about his life, but it’s not yet finished. You have to wait.”

Darwin previously wrote an autobiography, The Canoe Man: Panama and Back, which he wrote while serving three years and six months in prison.

ITV have turned his story into a major drama, The Thief, His Wife and The Canoe, set to hit UK screens on April 14.

The show, starring Eddie Marsan as Darwin, has reportedly sparked problems with Darwin’s second wife who is angry it has been made without his permission.

A friend said: “John and Mercy are really happy together. He feels like he’s been given a second chance at life and he’s grabbing it with both hands.”

The couple are understood to have met online in 2015, with another pal adding: “I have always believed John to be a rich guy. He still seems in good health.”

The pictures come just day safter Mercy claimed that her husband was going to Ukraine to fight Putin.

She said: “Yes, dangerous for the Russian when he shoot them.

“He will have a bullet proof vest and good life insurance, good for me.”

Darwin and his first wife Anne, 70, carried out the fraud in 2002 after running up huge debts in failed buy to let schemes.

The couple decided £670,000 in insurance and pension money was the solution to his problems, and so planned John’s death.

On March 21 John paddled out into the sea at Seaton Carew in County Durham in a red kayak and wasn’t seen returning to shore.

His wife Anne reported him missing, with a police plane with heat-seeking equipment, five RNLI lifeboats, two coastguard teams and an RAF helicopter all searching for John.

But they were unable to find the missing man, because he was safe in a tent further along the coast.

The next day his canoe was discovered wrecked and Anne was tasked with breaking the news to their sons, Anthony, 42, and Mark, 45, that he was dead.

She later admitted that lying to her sons was “something that I will live to regret for the rest of my time.”

Ann also lied convincingly to the general public, telling the local newspaper: “All I want is to bury his body. It would enable me to move on.

“It’s difficult to grieve without bringing things to a close but as it is, I’m in limbo.”

Darwin then moved to a bedsit next door to the family home, making a door behind a wardrobe into Anne’s bedroom and growing a bushy beard as a disguise for trips into town.

By April 2003 a coroner had declared John dead and by August Anne started to receive huge sums.

In 2006 the couple headed to Panama to start a new life with their ill-gotten gains, but were caught after coming home to get documents to enable the move.

But he gave his real name, claiming that he had been suffering from amnesia, and his survival was hailed as a miracle.

Police started investigating the couple after a photo emerged of the couple smiling alongside an estate agent in Panama in December 2007.

John pleaded guilty to seven charges of obtaining cash by deception and Anne was found guilty of similar offences after going to trial.

Both Darwin’s were handed just over six years in prison for their crimes, and were ordered to repay £679073.

She has since moved to a village near Middlesbrough, using her maiden name in an attempt to rebuild her life.

The astounding scam is now being re-told in a four-part ITV series called ‘The Thief, His Wife and a Canoe’ and stars Eddie Marsan as John while BAFTA award winner Monica Dolan takes on the role of Anne.

The drama will put a new spin on the fake death with Anne being portrayed as someone who was forced to go along with the plan by her narcissist husband.

The makers of the series say it will show her as a bullied wife who is emotionally blackmailed into taking part in the scam and left devastated after her sons disowned her.

Aussie drug bust Thai and Cambodian nationals to be investigated