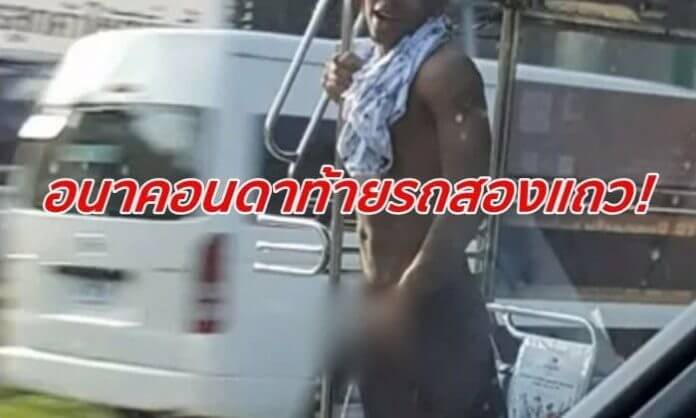 A “dark skinned” foreigner thought it would be jolly good fun to urinate on the road from a moving song thaew (known in Pattaya as a baht bus).

So, he undid his zipper and got out what Sanook News called his “anaconda” and started relieving himself all along Sukhumvit Road.

The man – said to have dark skin by Sanook – was having the time of his life as his mates egged him on laughing and joking.

This highly inappropriate behavior was witnessed by a candidate for Region 7 in the upcoming election who was out canvassing. Pramet Ngamphichet got one of his staff to tell the driver what he had seen when the song thaew stopped at the red light at the Huay Yai intersection.

The driver, Mr. Thaweesak, said he would take them to Pattaya police station to file a report.

Thaweesak later told Sanook that he had picked up six or seven tourists and was in the process of taking them along Sukhumvit Road to Central Beach, Pattaya.

He had been unaware of what had transpired but having been informed by the candidate’s rep he resolved to go to Pattaya police station.

However, as he turned into the police station the group of tourists got wise to the impending trouble and fled in several directions.

Police state they are searching for the foreigner who damaged the reputation of Pattaya.
Courtesy Sanook news and Thai Visa with light editing from us.

Love is in the Air! Valentines Day Football 11