Pattaya police and emergency services were on hand after a foreign man was found dead in South Pattaya in what police are describing as mysterious circumstances.

The victim was a 57 year old male, and was found dead in a small apartment in the Sout Pattaya area.

A call was made to police after local residents and security had sensed a foul smell in the area for a day or 2. They investigated a little further and concluded that the smell was coming from a room on the 7th floor at the condominium building, located in Soi 2 Arunothai.

Arriving at the scene, police were unable to gain access to the room normally, and were forced to break down the door using force.

Once inside, they found the body of the victim.

They did not find any ID documents to officially ID the body but have reason to believe the name of the deceased was Corin James, after translating a piece of Thai writing. This however is not confirmed.

Police made a quick search of the rest of the room but found no signs that indicated foul play. No signs of a struggle, or marks on the body were found.

Due to the state of decay the body was in when found, it is estimated that the victim had been dead for around 5 days already.

Police took several photos as evidence before the body was taken away for a full autopsy in order to determine the exact cause of death. 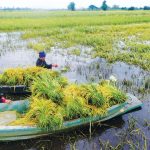